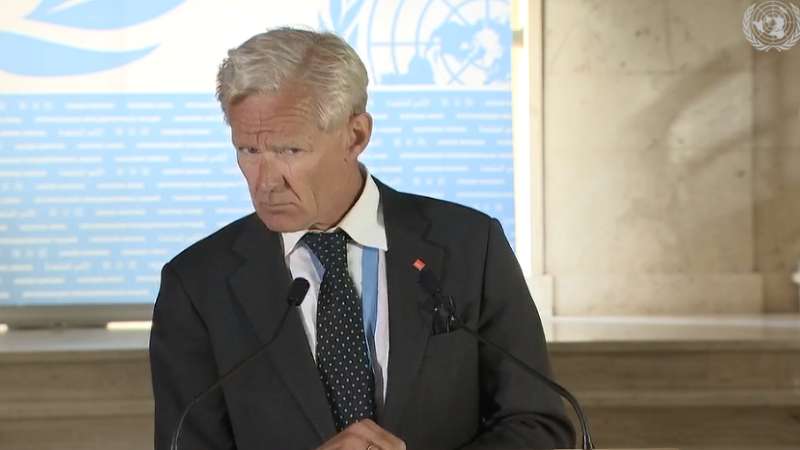 The Senior Advisor of the Special Envoy, Jan Egeland 28 June

A top UN adviser on humanitarian aid for Syria appealed to Jordan to keep border open to people going south because there is no other place for civilians to go.
Egland  said he believes the frontier with the Israeli-controlled Golan Heights is "hermetically closed" as tens of thousands of civilians flee new fighting in southwestern Syria.
Jan Egeland sayid new fighting in the Daraa and Quneitra regions has led to the discontinuation of what previously had been an "extremely effective lifeline across the border" from Jordan in recent days.
Speaking Thursday (June 28), he said: "I think you have to ask the Israelis whether they are going also to take part in giving shelter, protection, to people who flee."
He says five medical facilities have been hit in Daraa, and that the area targeted by the latest Assad offensive is home to some 750,000 civilians "increasingly fleeing for their lives."
The UN Syria envoy warned on Wednesday of a full-scale battle in the country’s southwest, an area covered by a “de-escalation” ceasefire agreement.
Envoy Staffan de Mistura, briefing the United Nations Security Council on setting up a Syrian constitutional committee, said the modest political achievement risked being overtaken by the escalation in fighting.
__new_in_first_article1__
“We see a full-scale ground offensive and aerial bombardment, as well as exchanges of fire from both sides,” he said, speaking by videolink from Geneva.
He warned that the battle could affect a population and an area similar to the total affected by the battles for eastern Ghouta and Aleppo combined, naming perhaps the two biggest and bloodiest campaigns of the seven-year war.
The Security Council could not allow another battle of such magnitude, he added.
US Deputy Permanent Representative Jonathan Cohen said the predominant opposition force in the area was the Free Syrian Army, not terrorists and not a permitted target designated by the UN.
Russia had launched air strikes in recent days, supporting Assad’s forces in an offensive that was taking a significant toll on civilians, breaking a year-long calm due to a de-escalation agreement in the area, he said.
“To be clear, the unilateral operations underway by the Assad regime and Russia in southwest Syria represent a violation of the ceasefire arrangement reaffirmed by President Trump and President Putin,” Cohen said.