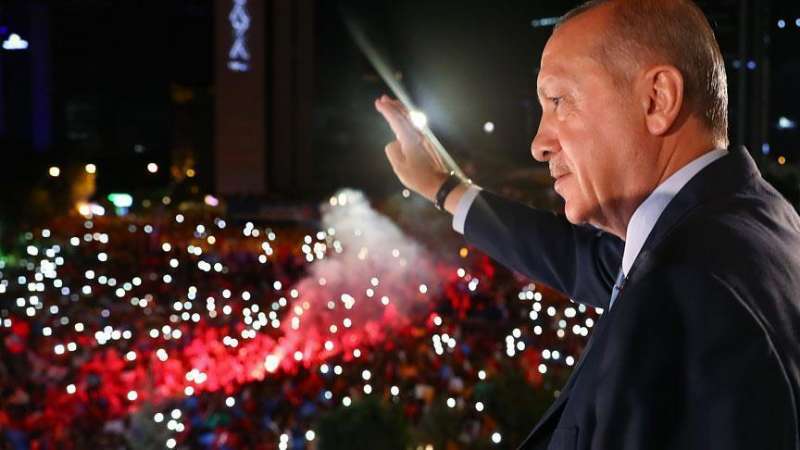 Orient Net
Turkey will continue to “liberate Syrian lands” so that refugees can return to Syria safely, President Tayyip Erdogan said in an election victory speech on Monday (June 25).
Speaking to supporters from the balcony of his ruling AK Party’s headquarters in Ankara after Sunday’s presidential and parliamentary elections, Erdogan said Turkey would also act more decisively against terrorist organizations.
"We will increase our country’s international reputation," he added.
"Immediately after the oath-taking ceremony, we will start implementing our program by identifying our bureaucrats," Erdogan said, vowing to work day and night as "we have no single moment to lose."
"Turkey has decided to take the side of growth, development, investment, enrichment and a reputable, honorable and influential country in all areas in the world," Erdogan said.
Erdogan said every one of the 81 million Turkish citizens is a winner. "Winners of June 24 elections are Turkey, Turkish nation, sufferers of our region and all oppressed in the world," he said.
He also thanked Nationalist Movement Party (MHP) leader, members and voters.
"I would like to express my gratitude to my people, my brothers and sisters who put their trust in me, my alliance and my party," he said.
Earlier on Sunday, Erdogan declared his success in Turkey’s historic presidential and parliamentary elections.