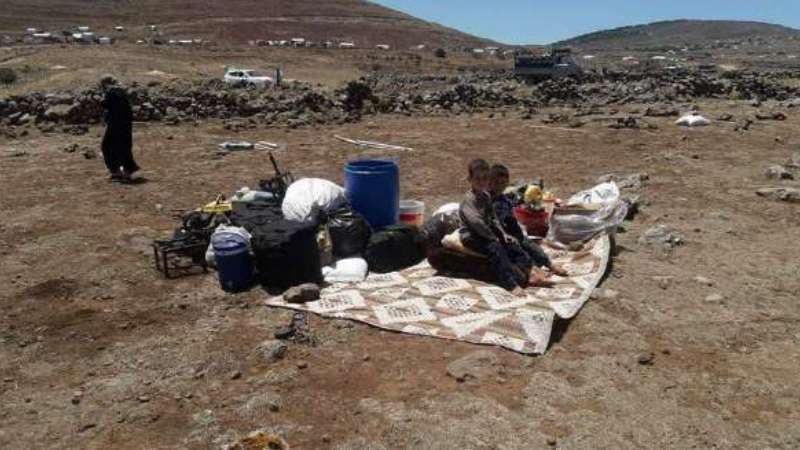 Orient Net
Daraa Northern countryside is witnessing massive displacement of thousands of people towards Daraa eastern countryside and the villages adjacent to the border strip with Jordan and the occupied Golan.
Displacement movements coincided with military escalation and heavy bombardment of  Assad sectarian militias against civilians in Daraa.
Many displaced families arrived at several camps in Quneitra such as Bariqa, Akasha, Karama, and Al-Amal camps, in addition to collective shelters in Quneitra countryside.
“We could not carry anything when we fled bombardment,” An IDP told Orient. “we wait for humanitarian organizations and NGOs to provide us with humanitarian assistance and tents,” he added.
Bariqa camp manager told Orient that more than 200 newly displaced families have arrived at the camps in Quneitra governorate.
Local sources told Orient that Jordanian authorities have notified the FSA military factions deployed on the Jordanian border to prevent IDPs from approaching the border fence. Knowing that the Jordanian army has reinforced its positions on the border deploying additional military vehicles.
US State Department spokeswoman Heather Nauert said on Thursday (June 21) that Washington was "deeply troubled" by the Assad operations in the area and called on Moscow to "restrain" its ally from further actions that risk broadening the conflict.