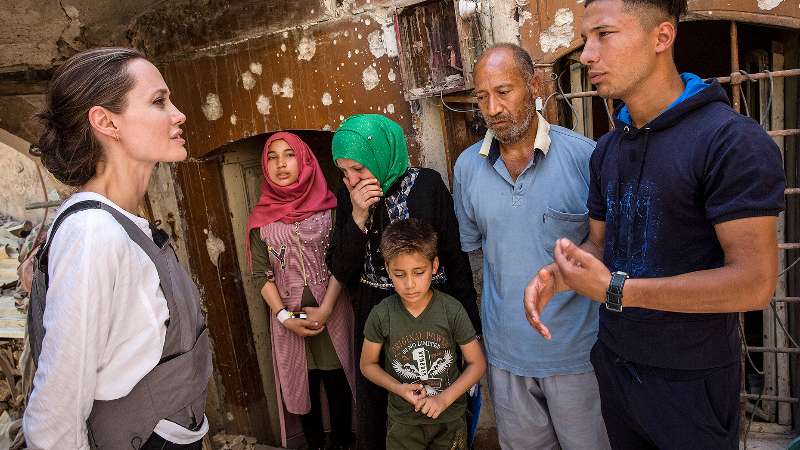 Angelina Jolie meets with Mohamed and his family during a visit to the old city in Mosul on June 16, 2018. Andrew McConnell / UNHCR via Getty Images
Orient Net
UN refugee agency special envoy Angelina Jolie on Sunday (June 17) visited a camp for Syrian refugees in northern Iraq to drum up support for those displaced by years of war.
The Hollywood actress toured the Domiz camp, home to 33,000 refugees.
Jolie arrived in the morning and met families in the camp, a United Nations official said.
A day earlier she visited Mosul that saw 900,000 residents flee.
Jolie met families from western Mosul and walked through bombed out streets, video footage and photos provided by the UN High Commissioner for Refugees (UNHCR) showed.
Normality has returned to many parts of Mosul, with displaced residents leaving camps nearby to return home.
But the old city in West Mosul was largely destroyed during a campaign. Reconstruction has been slow.
“This is the worst devastation I have seen in all my years working with UNHCR. People here have lost everything,” Jolie said in a UN statement.
“They are destitute. They have no medicine for their children, and many have no running water or basic services,” she said. “I hope there will be a continued commitment to rebuilding and stabilizing the whole of the city. And I call on the international community not to forget Mosul.”
Jolie has worked for UNHCR since 2001, visiting uprooted civilians from Iraq to Cambodia and Kenya. This is her fifth visit to Iraq, UNHCR said.