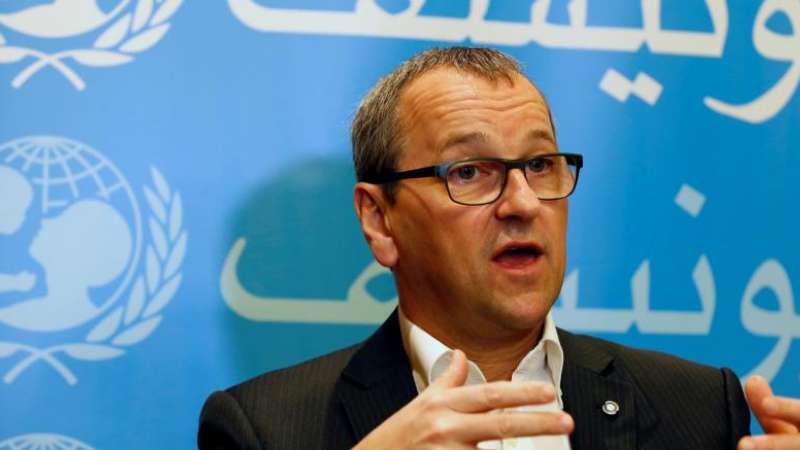 Geert Cappelaere, Unicef regional director for the Middle East and North Africa, speaks during an interview with Reuters in Beirut, Lebanon March 15 2017.
Orient Net
UNICEF documented killing 13 children in the past few days in Syria in a statement issued on Monday (June 11).
“UNICEF received reports that at least 13 children were killed in the past days in Syria,”UNICEF Regional Director in the Middle East and North Africa said
“An attack allegedly hit the village of Zardana in the northwestern governorate of Idlib killing nine children. Idlib is home to nearly 1 million children, many of them displaced from other parts of the country. With nowhere left to go, families have sought refuge in collective shelters and schools,” the statement added.
“These are deeply sad reminders that the war on children in Syria is far from over. The fundamental principle of protecting children everywhere and at all times is still a far-fetched dream for far too many families,” Geert Cappelaere added.
“The past seven years of war in Syria have shown that violence only fuels more violence, hatred and vengeance - and further fragmentation of a society torn apart. Since 2011, when the conflict began, nearly 6 million children were uprooted from their homes.”
The statement concluded: “There are no victors in any war on children. Everyone is losing with the biggest loss for children and the future of Syria.”
Russian warplanes which targeted on Thursday (June 7) the town of Zardana in Idlib northern countryside killed 50 civilians and injured many others.