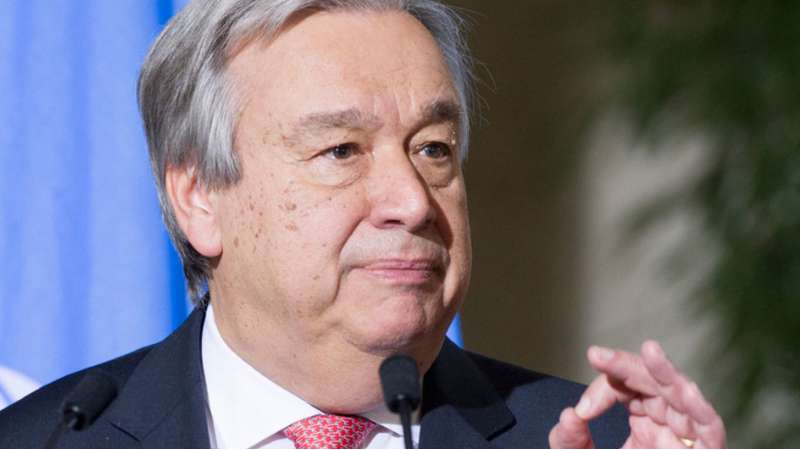 Orient Net
United Nations Secretary-General Antonio Guterres expressed deep concern over airstrikes that reportedly targeted a village in northern Idlib last week, killing dozens – including children.
“He calls for a full investigation into the attacks, especially allegations that there was also a second strike targeting first responders, to establish accountability,” said his spokesperson, Stephane Dujarric, in a statement on Sunday (June 10).
Mr. Dujarric noted that the Secretary-General recalled that Idlib is part of the de-escalation agreement reached in Astana, and called on its guarantors “to uphold their commitments.”
“The Secretary-General underscores the precarious plight of the estimated 2.3 million people in Idlib governorate, 60 per cent of whom are civilians displaced by the conflict from other areas, most recently from Eastern Ghouta,” he continued.
Mr. Guterres calls for "an immediate cessation of hostilities and urges all stakeholders to respect their obligations under international humanitarian law, including the protection of civilians and civilian infrastructure,” the statement concluded.
Lynn Maalouf, the director at Amnesty International said on (June 8):
“This outrageous attack, the deadliest in Idlib so far this year, targeted the village of Zardana overnight while people were breaking the Ramadan fast. Among those killed were at least six children, and the death toll is expected to rise as the wounded succumb to their injuries. Deliberately attacking civilians violates international humanitarian law and is a war crime.
“We are deeply troubled by reports that this was a ‘double-tap’ strike, in which aircraft follow up on an initial attack with a second strike which generally hits rescue workers and others coming to the aid of casualties. These cruel attacks have happened time and again in Syria, and demonstrate utter disregard for the lives of civilians and for fundamental principles of international humanitarian law,” she added.
The Russian air attack that targeted the village of Zardana in Idlib province on Thursday (June 7)  left 50 dead including six children.