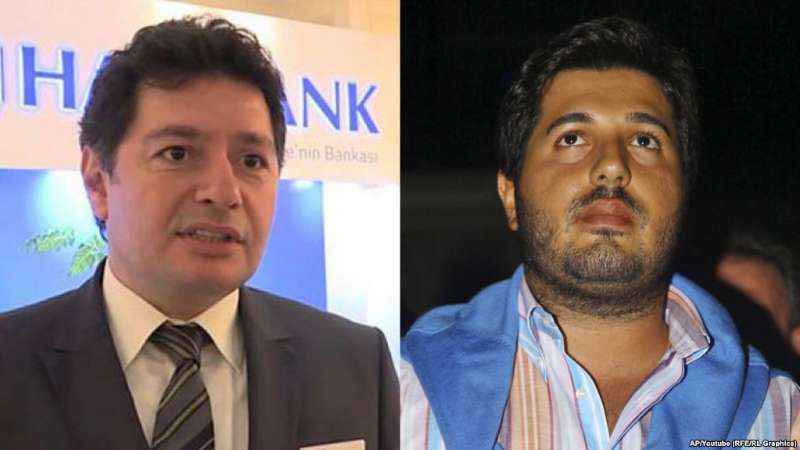 US prosecutors accused banker Mehmet Hakan Atilla (left) of conspiring with Turkish-Iranian gold trader Reza Zarrab (right) to help Iran evade sanctions.
Turkish President Recep Tayyip Erdogan’s spokesman has condemned a recommendation by US prosecutors that a Turkish Halkbank executive get 20 years in prison for helping Iran evade US sanctions.
"We strongly condemn and reject this decision, it is a grave injustice," spokesman Ibrahim Kalin told a news conference in Istanbul on April 5 when asked about the sentencing recommendation by US attorneys for Halkbank executive Hakan Atilla, who was found guilty of evading sanctions on Iran by a US jury in January.
"The Hakan Atilla case is a legal scandal," Kalin said.
Erdogan earlier this year called the case "an attempt to stage a new coup" in Turkey because two witnesses for the prosecution testified that high-level Turkish officials and Erdogan himself were involved in the scheme to help Iran launder revenues derived from oil sales in global financial markets in violation of US sanctions.
__new_in_first_article1__
US prosecutors accused Atilla, 47, of conspiring with Turkish-Iranian gold trader Reza Zarrab from 2010 to 2015 to help Iran evade sanctions by disguising the oil sales as fraudulent gold trades and food-aid transactions.
"At a time when the United States and the community of nations were engaged in the momentous undertaking of depriving the government of Iran of funding for its malign and deadly activities," including its alleged pursuit of nuclear weapons and support for terrorist groups, "Atilla was a key player in massively undermining those efforts," prosecutors said in a court filing.
Iran has denied pursuing nuclear weapons or supporting terrorists. The case exposed, however, how high-level Iranian officials allegedly maneuvered to get around US sanctions which prohibit Tehran from using the US dollar or US financial institutions in global trade.
Atilla is to be sentenced on April 11 by US District Judge Richard Berman in Manhattan.
In a court filing last week, Atilla’s lawyers urged leniency, saying the case did not involve "economic crimes" or a "crime of American disloyalty" by their client, a Turkish national, and that "no victims" suffered a financial loss.
قيم هذا المقال