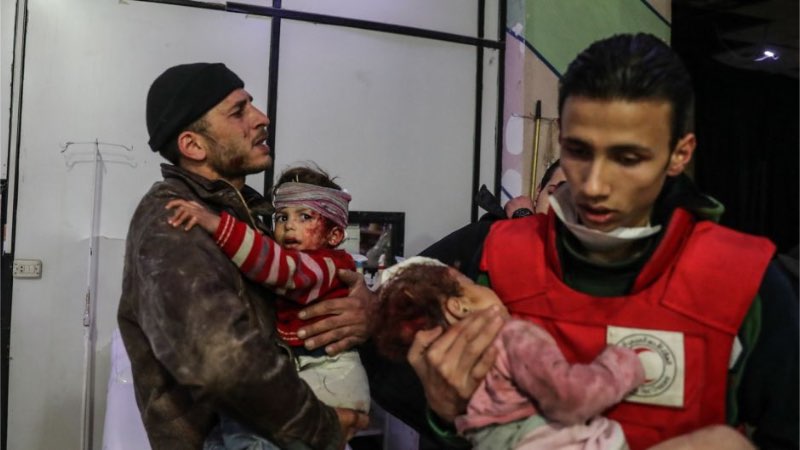 Orient Net
The United Nations children’s agency has issued a statement of protest against the reported killing of dozens of people, including several children, in the Assad regime’s bombardment of opposition-held Eastern Ghouta in Rural Damascus.

UNICEF’s one-page statement, released Tuesday by its regional director for the Middle East and North Africa, carries the headline: "Do those inflicting the suffering still have words to justify their barbaric acts?"

The headline is followed by blank space underneath. UNICEF said it issued this blank statement because "we no longer have the words to describe children’s suffering and our outrage."

The bombardment of Syria’s opposition-held Eastern Ghouta area near Damascus by pro-Assad forces militia has killed more than 240 people in 48 hours since Sunday night.
__new_in_first_article1__


The violence in Eastern Ghouta is part of a wider escalation in fighting on several fronts in Syria as Assad pushes to end the seven-year revolution against him.

Neither the Assad regime nor Russia commented on the renewed bombardment in the region, but they have often said they do not target civilians.

France said on Tuesday that the bombing of Eastern Ghouta by pro-government forces amounted to a serious violation of international humanitarian law and called for a humanitarian truce.

The attacks "deliberately target inhabited areas and civilian infrastructure, including medical ones. They constitute a grave violation of international humanitarian law," the foreign ministry said in a statement.
قيم هذا المقال 29 0