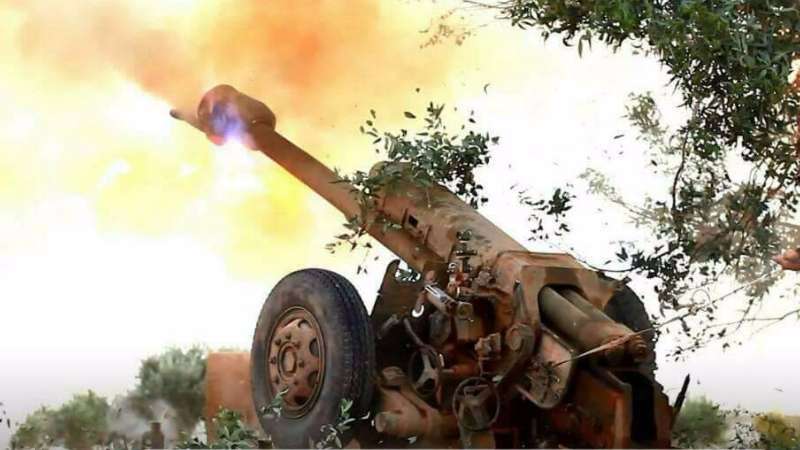 Orient Net
Assad regime offensive continued in eastern Hama countryside, while Tahrir Al-Sham and other FSA factions were fighting to repel a dual attack by regime militias and their supporting Shiite militias on the one hand and ISIS on the other hand.

Tahrir Al-sham, in coordination with Turkistan Islamic Party, thwarted, a new attack by regime militias and their supporting Shiite militias against the Al-Mestriha village, destroying a tank and seizing another, and causing 12 deaths among regime militias.

The Elite Army and Tahrir Al-sham targeted with artillery the positions of regime’s militias in Sarha village and killed four, knowing that revolutionary factions have regained control of the Tallat Al-Balil and the Shkhaiter village in Hama countryside.

Head of Izzah Army media office, Obada Al-Hamwi, confirmed that four tanks and a 57-mm gun of regime were destroyed on all the Syriatel, Al-Zafiriyah and Al-Blel battlefronts in eastern Hama countryside, using guided missiles and antitank missiles.

In total, the death toll of regime militias members increased to 50 including officers and foreign fighters, according to Orient correspondent, while lieutenant Hasan Abo al-Baraa from Nasr Army told Orient that the army destroyed a military bulldozer and a machine gun of regime forces, confirming also the increasing number of ISIS members in the area without any obvious reasons.