US general told PKK-affiliated Kurds to change ’brand’ into SDF

US general told PKK-affiliated Kurds to change ’brand’ into SDF 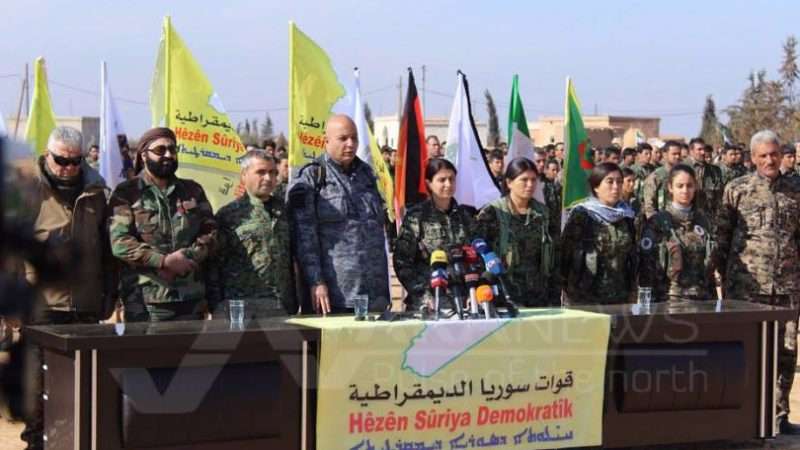 US general told PKK-affiliated Kurds to change ’brand’ into SDF
__new_Underarticle_image_EN__
Orient Net - Agencies
One of America’s most senior generals said on Friday he instructed the Kurdish YPG militia to change its "brand" a day or so before the so-called Syria Democratic Forces (SDF) was created, Reuters reported.
The recounting by US Army General Raymond Thomas, the head of Special Operations Command, offered a glimpse into the mechanics that preceded a major rampup in US support to the PKK-affiliated Kurdish militants despite fierce opposition from NATO ally Turkey.
Turkey views the YPG as an extension of PKK militants waging an insurgency on Turkish soil, and has sharply criticized US support to the group, which has increased over time.
Thomas said he made the Turkish concerns known to the YPG back in 2015.
"We literally played back to them: ’You have got to change your brand. What do you want to call yourselves besides the YPG?’ With about a day’s notice they declared that they are the Syrian Democratic Forces," Reuters quoted him as saying.
"I thought it was a stroke of brilliance to put democracy in there somewhere. But it gave them a little bit of credibility."
Thomas was speaking at the Aspen Security Forum in Colorado, an annual conference bringing together government and military national security leaders and experts.
__new_in_first_article1__
Thomas then described the evolution of the group, which suffered heavy losses in early battles against ISIS but kept fighting and growing in strength and numbers under the SDF banner.
Tensions between the YPG and Turkey have persisted, in turn straining ties between Washington and Ankara. Turkey has sought assurances from the United States that arms being provided to defeat ISIS militants will not later be turned against Turkey.
The YPG now controls vast stretches of land along the border northeast of Aleppo and a pocket of territory to its northwest. In between, Turkish-backed anti-Assad fighters have taken over territory to keep Kurdish militants from linking up.
Earlier this month, the head of the Syrian Kurdish YPG militia said Turkish military deployments near Kurdish-held areas of northwestern Syria amounted to a "declaration of war."
Turkish-backed Syrian opposition fighters clashed with PKK-affiliated Kurdish militants on Monday around the village of Ain Daqna and the nearby Menagh air base north of Aleppo.
US Defense Secretary Jim Mattis last month left open the possibility of longer-term assistance to Kurdish YPG militia in Syria, saying the United States may need to supply them weapons and equipment even after the capture of ISIS’ Syria stronghold of Raqqa.
Thomas also acknowledged that possibility. But he said perceived links between YPG and PKK create problems.
"They got to work on their own branding. If they continue to keep linkage to their past product - the PKK linkage, specifically - the relationship is fraught with challenges," he said.