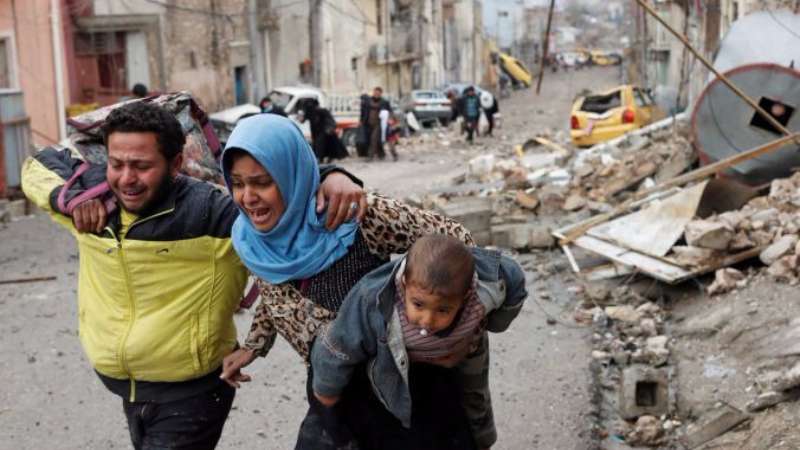 Orient Net - Agencies
More than 40,000 civilians were killed in the devastating battle to retake Mosul from ISIS, according to intelligence reports revealed exclusively to The Independent – a death toll far higher than previous estimates.
Residents of the besieged city were killed by Iraqi ground forces attempting to force out militants, as well as by air strikes and ISIS fighters, according to Kurdish intelligence services.
Hoshyar Zebari, until recently a senior minister in Baghdad, told The Independent that many bodies “are still buried under the rubble”. “The level of human suffering is immense,” he said.
“Kurdish intelligence believes that over 40,000 civilians have been killed as a result of massive firepower used against them, especially by the federal police, air strikes and ISIS itself,” Zebari added.
Zebari, a native of Mosul and top Kurdish official who has served as the Iraqi finance minister and prior to that foreign minister, emphasized in an exclusive interview with the Independent that the unrelenting artillery bombardment by units of the Iraqi federal police, in practice a heavily armed military unit, had caused immense destruction and loss of life in west Mosul.
The figure given by Zebari for the number of civilians killed in the nine-month siege is far higher than those previously reported, but the intelligence service of the Kurdistan Regional Government has a reputation for being extremely accurate and well-informed. ISIS  prevented any monitoring of casualties while outside groups have largely focused on air strikes rather than artillery and rocket fire as a cause of civilian deaths. Airwars, one such monitoring group, estimated that attacks may have killed 5,805 non-military personnel in the city between 19 February and 19 June.
Mr Zebari accuses the government in Baghdad, of which he was until recently a member, of not doing enough to relieve the suffering. “Sometimes you might think the government is indifferent to what has happened,” he said.

Reading from Kurdish intelligence reports, Zebari says that a high level of corruption among the Iraqi military forces occupying Mosul is undermining security measures to suppress ISIS in the aftermath of its defeat. He says that suspect individuals are able to pass through military checkpoints by paying 1,000 US dollars and can bring a vehicle by paying 1,500 US dollars.
The ability of ISIS militants to remain free or be released from detention by paying bribes has led to a change in attitude among people in Mosul whom Zebari says “were previously willing to give information about ISIS members to the Iraqi security forces”. They are now wary of doing so, because they see members of ISIS, whom they had identified and who had been arrested, returning to the streets capable of exacting revenge on those who informed against them. Several anti-ISIS people in Mosul have confirmed to The Independent that this is indeed the case and they are frightened of these returnees and ISIS “sleeper cells” that continue to exist.
Corruption by the occupying military forces takes different forms, according to Kurdish intelligence information cited by Zebari. Some people are “being charged 100 (US dollars) for removing a body from the rubble and others 500 (US dollars) to reoccupy their house”, where it is still standing. Iraqi army and militia units have always been notorious for exacting fees and protection money from civilians, with trucks moving goods on the roads being a particularly profitable target when they pass through military checkpoints.