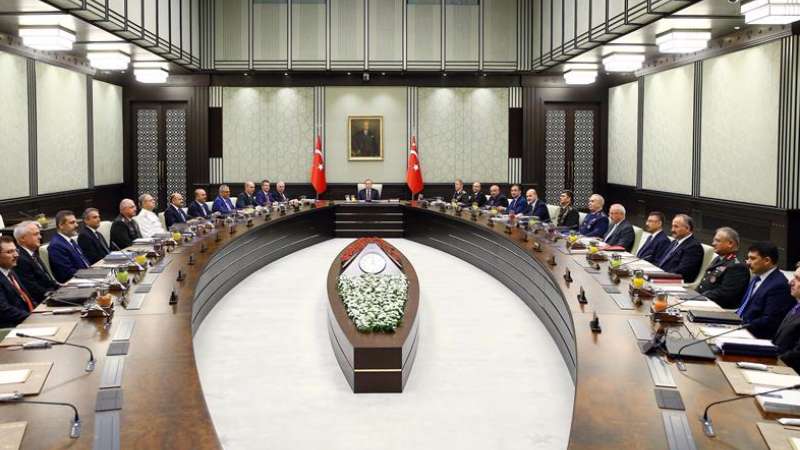 Turkey resolves to never allow ’terror state’ on border
__new_Underarticle_image_EN__
Orient Net - AA
The National Security Council meeting in Ankara on Monday resolved that Turkey would never allow a terrorist state to be established on its border.
According to a statement issued after the council’s meeting at the presidential complex in the capital, the meeting highlighted that the PKK/PYD terror group cannot be legalized, even if it was fighting against another terrorist group Daesh.
Ankara views the PYD and its arm the YPG as the Syrian branches of the PKK terror group.
Arms sent by certain allied countries to the PYD (in northern Iraq and Syria) have been delivered to PKK terrorist organization, which vindicates Turkey’s rightful objection to the arming of Syrian terror affiliate, the statement said.
Turkey has repeatedly objected to the supply of weapons to terror groups on the pretext of an operation to oust Daesh from Syria’s northern city of Raqqah.
However, the U.S. considers the PKK/PYD as a "reliable partner" on the ground in Syria and continues to support them in the field.
"Without leaving double standards on terror organizations, regional peace and security are impossible," the statement read, calling on the international community for a mutual understanding to fight terrorism.
Referring to the independence referendum backed by the Kurdish Regional Government (KRG) in northern Iraq, the statement said the decision would not be in accordance with the law.
__new_in_first_article1__
It would be a "grave mistake" and "will result in undesired results," it said, adding that territorial integrity and unity of Iraq is vital for regional peace and security.
- State of emergency extended
In March, KRG President Masoud Barzani held a meeting with UN Secretary General Antonio Guterres in Erbil city during which he announced that within a short period of time a referendum would be held to decide the fate of the region.
About the extension of the ongoing state of emergency in Turkey for another three months, the national security statement said the motion was submitted to the parliament "to ensure the continuation of measures taken to protect our democracy, the state of law, the rights and freedoms of our citizens".
On Wednesday, the motion was approved with votes in favor from the ruling Justice and Development (AK) Party and the opposition Nationalist Movement Party (MHP); the extension will become effective from Wednesday at 1.00 a.m. (2200 GMT Tuesday).
Turkey declared a state of emergency on July 20, 2016, after the defeated coup of July 15, 2016 attempted by Fetullah Terrorist Organization.
At least 250 people were martyred and nearly 2,200 others were injured in the coup attempt.
During the state of emergency, the Cabinet has the right to issue statutory decrees under the president of the republic without regard to routine procedures and restrictions in Article 91 of Turkish Constitution.
According to the Constitution, a state of emergency can be declared for a maximum period of six months.