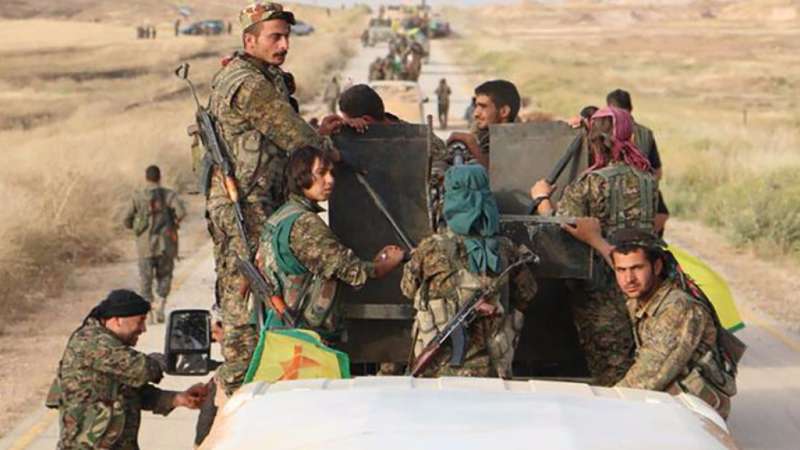 PYD’s 'security' arm forcibly recruits young Arabs, including children
__new_Underarticle_image_EN__
Orient Net
PYD’s "security" arm, Asayish, continue to carry out forced recruitment campaigns in the cities and towns of al-Hasaka, in order to support its militias with new recruits.
The forced recruitment campaigns launched by the Kurdish units in al-Hasaka target Arabs and displaced persons from Deir ez-Zoor, Raqqa and Aleppo eastern countryside, regardless of their age and educational status.
Recruitment of Arab IDPs
A member of al-Khabur media network, Fadhil al-Khader, said that the Asayish militants intensified their forced recruitment campaigns in the cities and towns of Ras al-Ain, al-Qamishli, Tal Tamr, Jabal Abdul Aziz, al-Shadadi and al-Hasaka, during which it forcibly recruited more than 400 young men in less than a week, noting that some were still in school.
Al-Khader toldOrient Net that the recent recruitment campaign is under the heading of "Self-Defense in al-Jazeera Province", which includes all young men and women from different cities and towns of al-Hasaka, as well as residents of al-Jazeera province and its displaced.
The Law of ‘Self-Defense’
The PKK-affiliated PYD approved a few days earlier a draft law that would allow the forced recruitment of Arabs in the province of al-Hasaka.
__new_in_first_article1__
The new law consists of 32 articles, one of which stipulates that all Arabs above the age of consent must perform the "duty of self-defense."
Training and detention centers
"After they (Asayish) arrest the young people, they transfer them to newly established training centers in former prisons south of al-Hasaka, Tal Baidar north of the city and Markaz in Mabrouka camp,” al-Khader said, continuing “they are then sent to the battlefronts after completing the 30-day training courses.”
He noted that many of the young forcibly recruits were killed in the previous period during battles with ISIS because of their lack of combat experience and PYD’s use of them as human shields.
Recruiting children
Local sources within the PYD-controlled towns where the forced youth recruitment is taking place confirmed that the forced recruitment is “officially” targeting young people between the ages of 18 and 35, however, these campaigns include forced recruitment of children and people over the age of 40 for combat.
The YPG militia is racing against ISIS to recruit as many children as possible.
Human Rights Watch said in a previous report in 2017 that Kurdish militias continue to violate the ban on recruitment of children under the age of 18. The report compiled a list of 59 children, ten of whom under fifteen, who were recruited by YPG since July 2014.