PYD leader threatens to hand over Efrin to Assad regime

PYD leader threatens to hand over Efrin to Assad regime 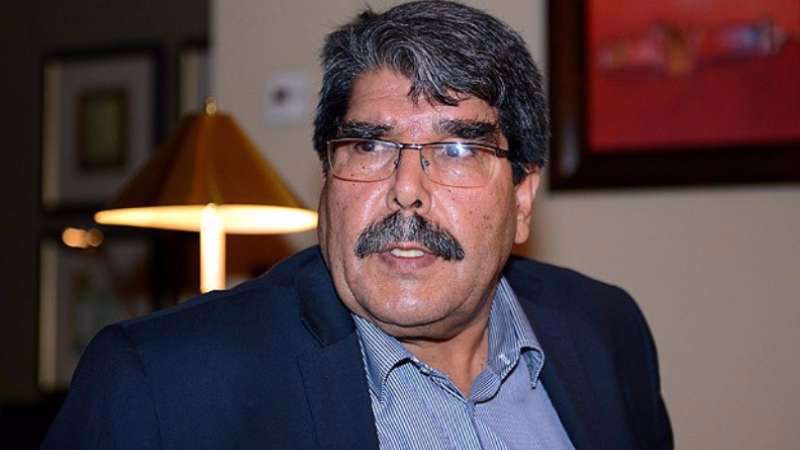 The Democratic Union Party (PYD) ringleader, Salih Maslem
__new_Underarticle_image_EN__
Orient Net
The Democratic Union Party (PYD) ringleader, Salih Maslem, threatened to hand over the region of Efrin in Aleppo north-western countryside to the Assad regime if Russia and the US would not put an end to Turkish threats of entering Efrin.
The co-president of the Kurdish party, which is primarily made up of People's Protection Units (YPG), told Ronahi News TV Channel on Wednesday (July 5) "We asked the United States and Russia to intervene and stop the Turkish aggression on Efrin. If they do not help us stop this aggression, we will hand over Efrin to the Syrian (Assad) regime, just as we did with Manbij,” Rojava News reported. 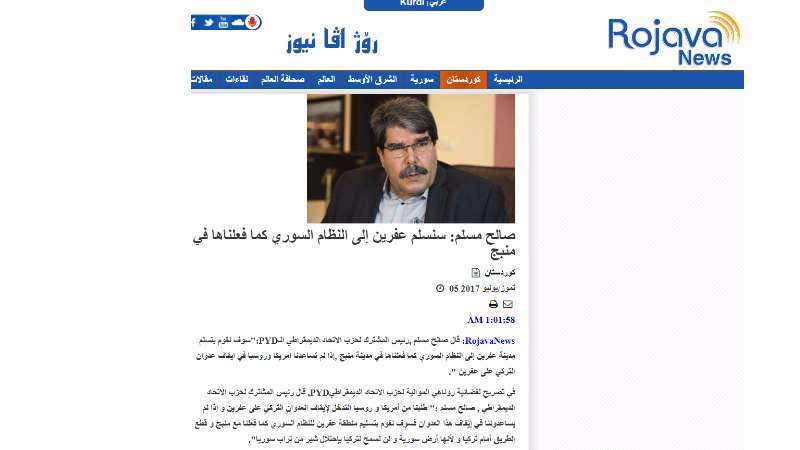 Turkish anti-YPG operation in Afrin
The latest threats by Maslem came hours after Turkey said it may launch a cross-border operation into the Kurdish-controlled enclave of Efrin in northern Syria if it constitutes a "constant security threat."
Turkish Defense Minister Fikri Isik told state-run television TRT on Tuesday that Turkey's military will continue to respond to the "slightest fire" into Turkish territory from Efrin.
He spoke hours after reports that Turkey's military retaliated overnight to fire from areas controlled by YPG.
Turkey considers the main Syrian Kurdish militia (YPG), which is supported by the United States, to be an extension of Kurdish rebels fighting in Turkey (PKK).
Last year, Turkey sent troops into Syria to help Syrian opposition forces battling to oust ISIS terrorists from another border region and to curb the territorial advances of the Syrian Kurdish militia.
__new_in_first_article1__
"We would not abstain from doing what is necessary if Afrin becomes a constant security threat," Isik said.
Turkish media reported that during the past days, about 20,000 Free Syrian Army fighters will participate in a Turkish military operation in Afrin region, after Ankara completed preparations for the process, which will take 70 days, and includes the capture of Tal Rafa’at city and the YPG-controlled Meng Military Airport.
Russia withdrew its troops from Efrin
Turkish newspaper Milliyet reported earlier that the Turkish side has conducted rounds of negotiations with the Russian one to discuss the planned military operation, pointing out that Russia began withdrawing troops it had deployed earlier in Afrin under the pretext of monitoring the truce.
The newspaper quoted a Russian diplomatic source as saying that “a new area is planned to reduce the tension in Afrin,” pointing out that security is ensured in this region by Turkish and Russian military, similar to the proposed mechanism to ensure security in the areas of “de-escalation zones”, including Idlib countryside.
‘Euphrates Sword’
Turkish Karar news website revealed on Friday a new operation by the Turkish army in northern Syria aimed at targeting PKK-affiliated militants.
The website reported that the Turkish operation, dubbed “Euphrates Sword”, has mobilized 7 thousand of its forces on the border, as it is expected to start operations from west of Azaz in the town of Ain Dokneh and Meng Military Airport until Tel Rifaat, Afrin, and Tel al-Abyad.