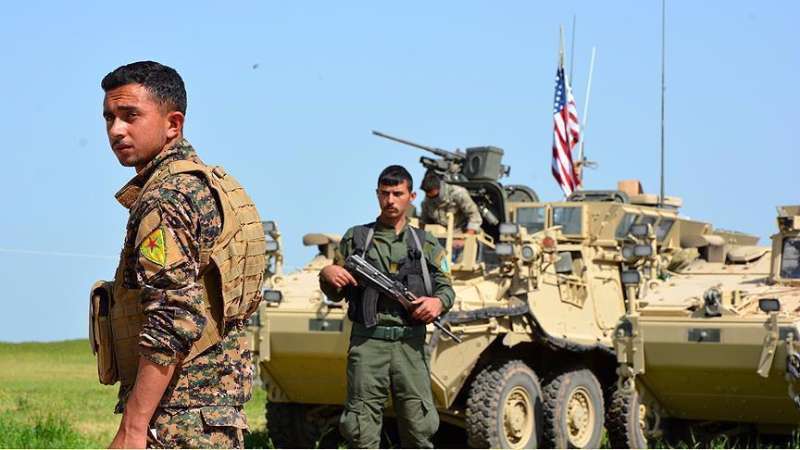 US 'continues to arm' PKK/PYD group in Syria, sources told AA
__new_Underarticle_image_EN__
Orient Net - AA
A total of 120 trucks allegedly carrying military equipment for PKK/PYD terror group were seen passing through Iraqi border and later arrived in northern Syrian province of Al-Hasakah between June 21 and Monday, sources in the region told Anadolu Agency.
Al-Hasakah is an area said to be under control of the terrorist PKK/PYD group.
Since June 15 when the U.S. President Donald Trump ratified the policy of arming PKK/PYD terrorists, at least 468 trucks have been sent to the region; 12 trucks were seen on June 5 and 20 trucks delivered military aids to PKK/PYD.
According to the Pentagon, the U.S. military aid to several armed groups in Syria, including the PKK/PYD, comprises of 12,000 Kalashnikovs, 6,000 machine guns, 3,500 heavy machine guns, 3,000 RPG-7s, 1,000 American AT-4 or Russian SPG-9 anti-tanks, 235 mortar guns of different calibers, 100 sniper rifles, 450 PV-7 night vision binoculars and 150 binoculars with infrared laser illuminator.
__new_in_first_article1__
The Combined Joint Task Force -- Operation Inherent Resolve (CJTF - OIR) led by the United States -- announced on June 6 that the Raqqah Operation was launched with the aim of clearing Daesh from the city center. However, sources in the region say such military aid by the U.S. has allegedly taken place since 2016.
The YPG is the armed wing of the PYD -- the Syrian offshoot of the PKK, which is designated a terrorist organization by Turkey, the U.S., and the EU.
PKK has waged a terror campaign against Turkey for more than 30 years, during which more than 40,000 people have been killed. The PKK is also involved in illicit drug production, manufacture, and trafficking.
According to Turkey, the YPG and PYD are terrorist organizations, too, as they are affiliates of the PKK.
However, the U.S. considers YPG/PYD as a "reliable partner" on the ground in Syria and continues to support them in the field. The terrorist group operates currently in northern Syria and controls the majority of the area close to the Turkish border.