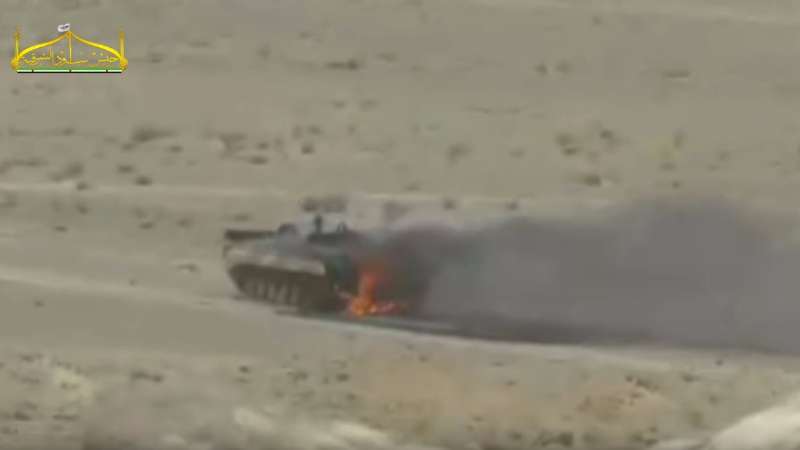 An Assad BMP vehicle is seen burning in the Syrian Desert after opposition fighters targeted it with an anti-armor missile on June 21, 2017 (Photo: Still from video footage published by Osoud al-Sharqiya)
__new_Underarticle_image_EN__
Orient Net
Free Syrian Army (FSA) fighters controlled on Monday (June 26) new military points in the Syrian Desert after a surprise attack against Iran-backed Shia militias.
Osoud al-Sharqiya opposition fighting group announced on its social media accounts controlling Rajm al-Sarihi in Beer al-Qasab area in the Syrian Desert after clashes with Assad terrorists and their backing Shia foreign militias.
Opposition fighters destroyed an Assad T72 tank and a number of other military vehicles. They also killed a number of Assad and Hezbollah terrorists and seized light and medium weapons, according to Osoud al-Sharqiya.
__new_in_first_article1__
Meanwhile, Assad or Russian warplanes carried out airstrikes on the areas where the clashes were taking place. The strikes used internationally-prohibited weapons, including vacuum, cluster and white phosphorus bombs.
These developments come days after the US-led international coalition issued a statement saying that a US jet downed a combat drone which was advancing towards the coalition’s land troops near al-Tanf base, few kilometers away from the tri-border area between Syria, Jordan and Iraq. The drone was of type Shahed 129, made by Iran, according to the statement.