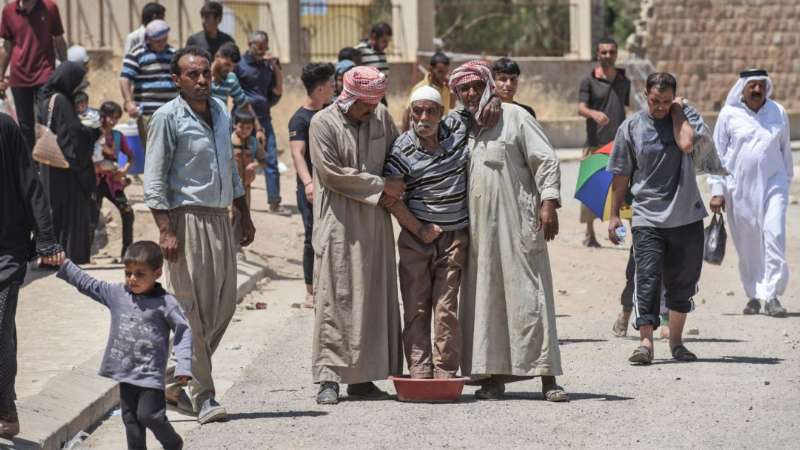 Human Rights Watch accuses Peshmerga of endangering Mosul's displaced (File Photo: AFP)
Orient Net
Human Rights Watch (HRW) said on Wednesday (June 21) that Kurdish Peshmerga militants are holding thousands of civilians, fleeing territory held by ISIS, at checkpoints and front lines for months on end as part of their security measures.
The rights group called on the KRG to allow blocked civilians to reach safety and allow humanitarian organizations access to provide assistance to those fleeing.
Lama Fakih, deputy Middle East director at Human Rights Watch was quoted by the rights group as saying “all armed forces in Iraq should be doing their utmost to help civilians reach safety, and to get food, water and medicine.”
“The situation will become even more urgent when anti-ISIS forces begin operations to retake Hawija and Tal Afar.”
Those fleeing civilians, who include entire families, have been displaced and arrived to Peshmerga-controlled territories from Hawija and Tal Afar.
Hawija, located some 50 km southwest of the city of Kirkuk, became an ISIS stronghold when militants swept across northern and western Iraq in 2014.
As many as 80,000 civilians still remain trapped behind ISIS lines in Hawija, according to HRW. The town of Tal Afar with an estimated 20,000 civilians living in it is around 55 kilometers west of Mosul.
“Peshmerga forces stopped civilians for days, weeks, and even in one case up to three months, in many cases leaving them vulnerable to ISIS mortar and suicide attacks and without food and badly needed assistance,” the HRW said citing individuals who had been stopped at checkpoints.
“One man who was held at a checkpoint with his family for three days in Maktab Khalid, a destroyed village on the frontline and within ISIS shelling range, said: ‘I spent those three days scared that ISIS would kill all of us, and, at the same time, that my children would freeze to death. Those three days were the most horrible days of my life.’”
“Another described how his 6-month-old baby died of lack of milk as his family waited to be allowed to cross.”
According to an Iraqi official, Peshmerga forces stopped civilians who fled through Maktab Khalid crossing until “the size of the crowd had reached at least 300 families.”
“These families have lived for years under the horrific abuses of ISIS, months with limited food, water, and medicine, and have just risked their lives trying to get to safety,” Fakih said. “Delaying people fleeing ISIS from reaching safety and getting the help they need is inhumane.”