UN urges Russia, Iran and Turkey to free up aid to Syria 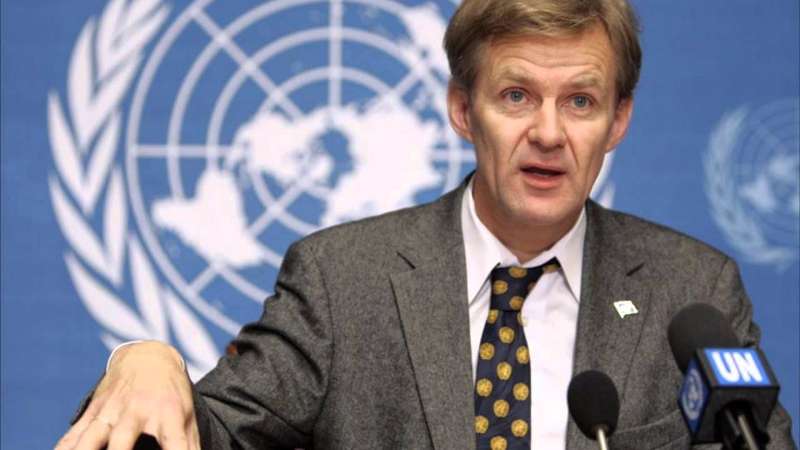 Jan Egeland, UN humanitarian adviser (File Photo: UN Media Center)
Orient Net
The United Nations urged Russia, Iran and Turkey on Thursday (June 15) to open up areas of Syria to the delivery of humanitarian aid in "de-escalation" zones whose parameters the three are meant to finalize.
The three countries brokered a deal in the Kazakh capital, Astana, in May to create four de-escalation zones in Syria. Russia said on Tuesday that the next round of negotiations in Astana was likely to be held in early July.
Jan Egeland, UN humanitarian adviser, said that UN technical experts were joining officials from Russia, Iran and Turkey in Moscow at preliminary talks that began on Thursday.
A Western diplomat told Reuters the two-day talks are to focus on setting GPS coordinates for the de-escalation zones.
Egeland, asked about his hopes for the Moscow meeting, told a news briefing: "That the de-escalation reaches a place like (the southern city of) Daraa, which is supposed to be a de-escalation zone but rather has been an area of increased fighting."
The United Nations had received an appeal from the Daraa provincial council describing "intensive bombardment of (opposition-held) Daraa city, including the use of barrel bombs", he said.
The Daraa region of southwestern Syria is split between opposition- and Assad-controlled areas.
'Open up humanitarian access'
Fighting has lessened in the northwestern Idlib region and in eastern Ghouta in the Damascus countryside, Egeland said, calling for using that window of opportunity to open up humanitarian access.
He said he hoped that the zones, in which some 2.5 million people are expected to live supposedly safe from harm in Syria's conflict, "will indeed become not only de-escalation zones but free humanitarian access zones", as spelled out in the Astana memorandum.
Russia, Iran and Turkey are trying "to agree on exact delineation of the zones," Egeland said.
"We have been invited to observe the (Moscow) meeting. We will certainly use any opportunity to tell them that we need free, unimpeded access and we certainly do not need a more bureaucratic system. We need an end to this red tape system that is keeping (humanitarian aid) away from many populations."
"We hope for white smoke from Moscow and Astana again soon." Egeland said. He expected UN aid convoys to arrive later in the day in hard-to-reach areas in Homs and Hama, and in besieged areas of eastern Ghouta at the weekend. It had been 40 days since the United Nations last reached any of the besieged areas where 680,000 people are trapped, which was Douma in May.
'Polio vaccine for Deir ez-Zor'
In addition, trucks are being prepared to ship polio vaccine into ISIS-held areas of Deir Ezzor governorate following confirmation of a "very dangerous" outbreak of the virus, AP quoted Egeland as saying.
He made the comments to reporters in the wake of the confirmation announced last week by the World Health Organization of two cases in Deir ez-Zor of a polio strain derived from vaccines that mutated under weakening health and immunization conditions.
He said 58 acute flaccid paralysis cases, a possible symptom of polio, had been reported in Deir ez-Zor this year through June 6.
Egeland said "it's one of the remarkable things" of Syria's war that people have been reached with vaccines, even in the Deir ez-Zor and Raqqa governorates held by ISIS.