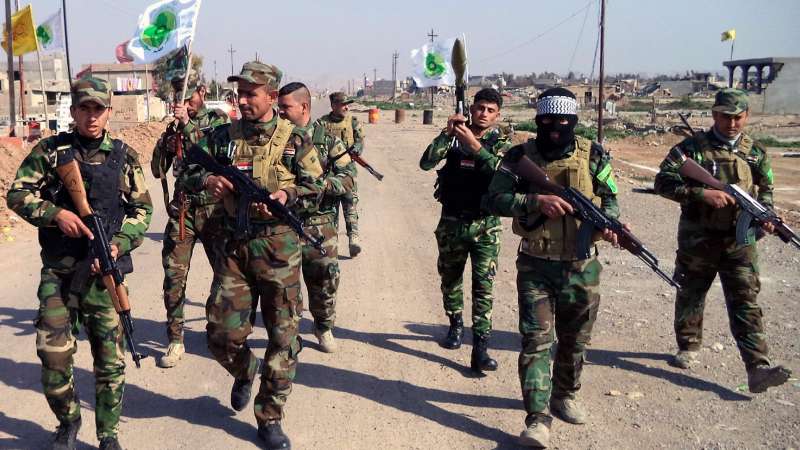 Militants of the Iraqi militia Badr Organization patrol in Tikrit, Iraq, on Feb. 7, 2015 (Photo: European Pressphoto Agency)
__new_Underarticle_image_EN__
Orient Net
The international watchdog Amnesty International (AI) confirmed the abduction of 643 men and children in Iraq’s al-Anbar governorate after the Shia militias’ control over Fallujah last year.
In a report issued on Sunday (June 11), AI said that “at least 643 men and boys from Saqlawiya in the Anbar governorate in Iraq, remain missing more than a year after they were abducted by Popular Mobilization Unit (PMU) militias.”
“The abductions happened during military operations to retake Fallujah and surrounding areas from the control of the armed group calling itself the Islamic State (IS),” AI added, pointing out that the families of the abductees “have lived in agony ever since, uncertain whether or not their loved ones are safe – or even still alive.”
__new_in_first_article1__
AI explained that “according to testimonies gathered by Amnesty International from former abductees, witnesses and relatives of those forcibly disappeared, thousands of men, women and children fleeing from the area of Saqlawiya on the morning of 3June 2016 were met by armed individuals carrying machine guns and assault rifles. Witnesses identified the armed men as members of the PMU, based on emblems on their uniforms and flags.
The armed men separated women and younger children from an estimated 1,300 men and older boys considered to be of fighting age. They took these men and boys to buildings, garages and abandoned shops in the nearby area, confiscating their identity documents, phones, rings and other valuables. Later, armed men bound their hands behind their backs, in most cases using plastic cuffs.
At sunset, several buses arrived and, together with a large truck already stationed there, transported a portion of the detainees. The fate of the men and boys who boarded these vehicles remains unknown.”