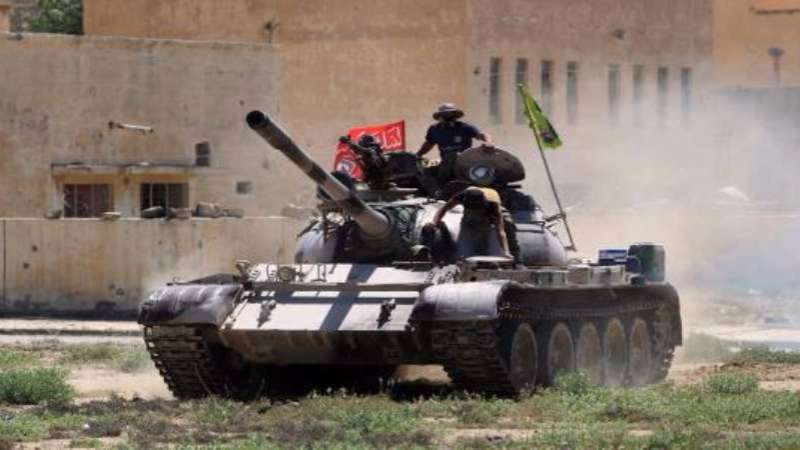 Shiite PMF riding a tank near the border with Syria (Photo: Iraqi media)
__new_Underarticle_image_EN__
Orient Net
A Baghdad military source confirmed that the Iranian-led Shia Popular Mobilization Forces (PMF) has not yet fully controlled the border with Syria as it continues to battle the terrorist group of ISIS.
The source told The New Arab that the Shia militia deployed hundreds of its terrorists in the axis near the town of Tal Afar, which exacerbated fears of a surprise attack on the town.
The sources added that Tal Afar is a sensitive area, stressing that the entry of the Shia terrorists will negatively affect the peaceful coexistence of the people.
__new_in_first_article1__
Meanwhile, a local official in the town of al-Baaj, west of Mosul, said that "hundreds of families were displaced during Shiite militants’ attack on the town,” noting that “they could not return because of the spread of Shia group in their town."
The official said that "the militias burned a lot of houses during the battles with ISIS in al-Baaj, which led most of the families to flee their homes and become forcibly displaces in fear of the Shiite militias’ human rights violations.”
“The presence of Shia militia in the western axis of Mosul created a state of instability,” the sources said, adding that “this will prevent the return of displaced persons, as well as create a security tension that affects any direction towards the reconstruction of these areas in the future.”
The officials warned of the danger of the Shia militias’ control of the western axis of Mosul and the Iraqi-Syrian border, stressing that it could create a major regional conflict.