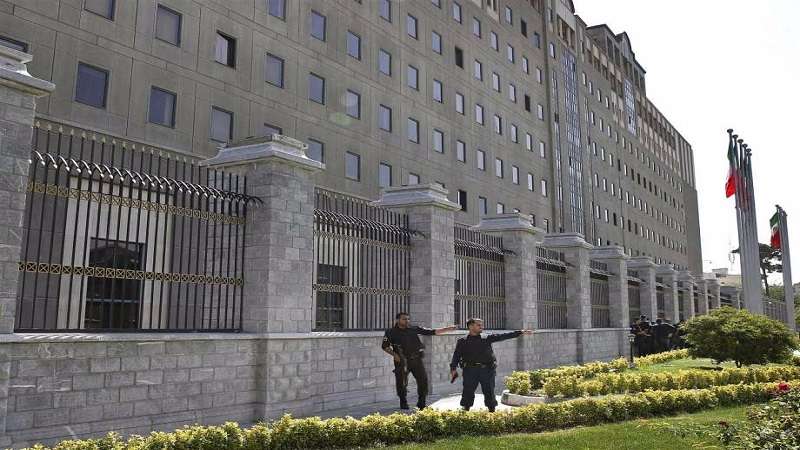 Police patrol outside Iran's parliament building after an assault by several attackers in Tehran, Iran, June 7, 2017 (Photo: AP)
Majid Rafizadeh - Arab News
A pair of devastating attacks has shocked the capital of Iran. At least 12 people have been killed in twin attacks on the Iranian Parliament and Ayatollah Khomeini’s mausoleum, one of Iran’s most sacred places.
According to Iran’s Ministry of Intelligence, a third attack was foiled. Around 42 people have reportedly been injured; six assailants, two at the mausoleum and four at the Parliament, were killed.
Deputy Interior Minister Mohammed Hossein Zolfaghari pointed out on state television that the gunmen were armed with Kalashnikovs and were dressed as women when they stormed the parliament building and opened fire.
At about the same time, nearly 30 km away from the Parliament, the second attack was carried out, with shooting and a suicide bombing targeting Ayatollah Khomeini’s shrine.
Unusual targets and attacks
Daesh’s Amaq news agency claimed that “fighters with the Islamic State” carried out the attacks in Iran, a predominately Shiite Muslim country. Nevertheless, the claim has not been verified.
Daesh, which is often opportunistic and swift in taking credit for major attacks, has not yet provided credible evidence showing that it carried out the assaults in Tehran. In addition, Daesh did not mention the third attack.
The nature of the attacks, which targeted political and ideological symbols rather than a crowd of ordinary people, appears uncommon for an extremist group like Daesh.
The assaults have also raised many questions including how the assailants were capable of coordinating such sophisticated attacks in highly secure and protected locations in Tehran.
Two most powerful symbols in Iran
The timing and locations of the attacks are significant politically and ideologically, and this is likely not accidental.
The attacks on the Parliament and Khomeini’s shrine are symbolic assaults on the Islamic Republic’s political identity, revolutionary ideals, core values and principles.
The mausoleum of Khomeini, the Islamic republic’s founder, is a powerful symbol of Iran’s revolutionary ideals as well as the Shiite political ideology of Wilayat Al-Faqih. That ideology, as expounded by Khomeini, gives the supreme leader custodianship over the people. The mausoleum, regarded as one of the holiest shrines for Shiites, is an important tourist destination, and is used symbolically by Iranian authorities when foreign officials visit Tehran.
The attacks were also carried out shortly after the 15th anniversary of Khomeini’s death on June 4, when tens of thousands of people visited the shrine.
Attacks of this kind are rare in Iran, particularly in the capital Tehran. This is because it is widely believed that various branches and forces of Iran’s Revolutionary Guard Corps, including the security forces, secret police, undercover informants and plainclothed Basij (a volunteer paramilitary force) are present throughout the nation.
Iranian President Hassan Rouhani previously declared that “Iran is the safest and most stable country of the entire region.” And some Iranian leaders are attempting to play down the attacks. Parliament Speaker Ali Larijani said via the state-run Islamic Republic News Agency (IRNA) that “some coward terrorists infiltrated a building in the Majlis (Parliament), but they were seriously confronted… This is a minor issue but reveals that the terrorists pursue troublemaking.”
It is believed that Iranian leaders have long attempted to project Iran as the safest and most secure country in the Middle East in order to further rally and galvanize domestic and international support, as well as increase the popularity of the IRGC in safeguarding the nation.
The twin attacks mark the first major assaults in Tehran since the establishment of the Islamic Republic in 1979. Iranian leaders have reported foiling terrorist plots by Daesh several times. But, this is the first time Daesh has claimed responsibility for attacks inside Iran.
Engagements in Syria, Iraq and beyond
Extremist groups including Daesh are predominantly active in two countries where Iran also plays a critical role: Iraq and Syria.
Iran has been providing military, financial, intelligence and advisory assistance to Bashar Assad and his forces in Syria. In addition, the Islamic republic supports various Shiite militia groups in countries including Iraq, Syria, Lebanon and Yemen.
It is believed that Iran’s sectarian agenda of supporting Assad and Shiite militia groups across the region have intensified regional sectarianism, widened the gap between Shiite and Sunni, and empowered extremist groups such as Daesh to recruit more fighters.
According to several intelligence reports, Iran has also sheltered terrorist leaders from extremist groups, such as Al-Qaeda.
Some believe that the attacks are direct consequences of Iran’s military interventions in several countries in the region. It is also thought that the empowerment of extremist groups such as Daesh plays into Iran’s interests by justifying its expansionist and hegemonic policies in the region. Although Iranian leaders repeatedly claim that they are fighting Daesh and other extremist groups in Syria and Iraq, Iran had not been attacked by any extremist group until Wednesday.
It has been said that the attacks will assist the Iranian leaders’ arguments that Daesh and other extremist groups are Tehran’s rivals, or that Iran is fighting extremism and terrorism in the region. Hence, the hard-liners — particularly the senior cadre of the IRGC and Quds Force — will further justify ratcheting up more forces and involvements in the region, including in both the Arab nations of Syria and Iraq.
It is believed that Iranian hard-liners will attempt to capitalize on the rally-round-the-flag syndrome, justify their military engagements in the region, galvanize more public support for involvements in Damascus and Baghdad, increase the military budget, and ratchet up domestic control through heightened securitization by police and intelligence forces.