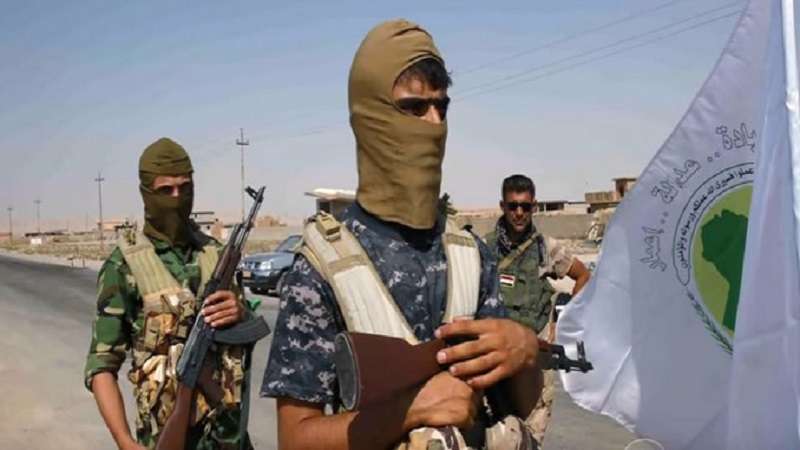 Iraqi militias close to the border with Syria (Photo: Still from CBS Evening News YouTube video)
Orient Net - Asharq Al-Awsat English
The Iranian government has a clear goal of creating a reality that is suitable for it when it comes to determining the fate of Syria and later expanding its role in Iraq.
To this end, Iran is leading the Iraqi and other militias and groups that it has established to have influence over to Syria to wage major battles to control the crossings and land passage to Damascus and other vital areas. This means the struggle will last for years, which will push regional powers to back the opposing groups that will in turn reproduce a new ISIS and lead to the failure of war on terrorism.
As part of its project, Tehran’s regime is using several excuses to justify its plan, mostly that it is fighting terrorist organizations and guarding the Iraqi border. In reality, it is drawing up the areas of its control on the border with Syria and it is attempting to impose its presence on the majority of the 300 kilometers, and then cross over with Iraqi militias to Syria.
Initially, Iran’s al-Quds Force had entered Syria to save Assad regime from collapse under the pretense of protecting Shiite shrines. It is now building its military presence under the claim of fighting ISIS, but in reality, it has a long-term project to control Iraq, Syria and Lebanon.
Iran’s military presence on the ground will expand during times of tensions and increased sectarian extremism in Syria and Iraq. Surely, this will sabotage the coalition project to eliminate the terrorist organization of ISIS because the sectarian practices of the Popular Mobilization Forces (PMF) will prompt Sunni areas to establish organizations to counter it.
This will raise a number of questions about the seriousness of the international campaign to combat ISIS. It will also open new fronts with Kurdish fighters when the PMF passes through their areas. This will also put the passage of armed Iraqi organizations to Syria under legal questioning.
Tehran is trying to impose a status quo on the international powers, including its ally, Russia, after it began sensing a partial shift in its stance.
Russia reportedly said that it currently has to deal with Iran and its foreign militias because they are present on the ground. Iran is trying to enforce this by transporting thousands of Iraqi and other fighters to northern Iraq to cross over into Syria.
Iran will tear Iraq apart and further fragment Syria. It will raise the terrorist risks that take advantage of the chaos and conflicts on several axes. It is not reasonable that concerned parties are looking for a political solution in Astana or Geneva while Iranian military leaders are left to sabotage the situation and ruin international efforts.
This requires exerting more pressure on Iran and making it see the need to remove all foreign fighters
Abdulrahman Al-Rashed (Asharq Al-Awsat English)