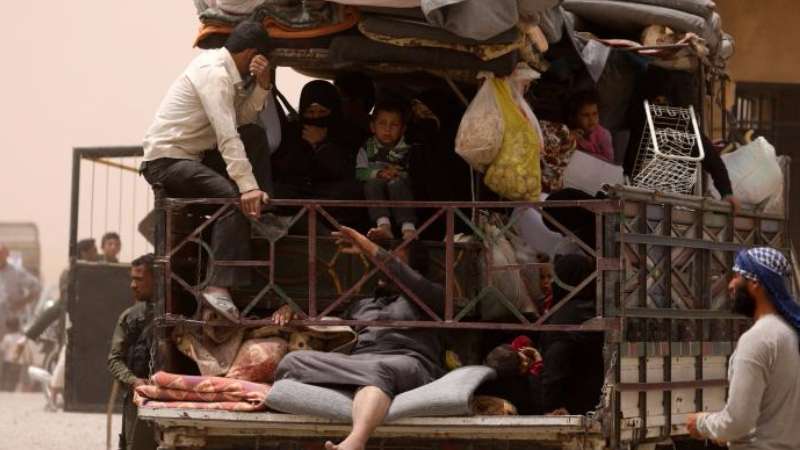 IDPs who fled Raqqa city ride a vehicle with their belongings in a camp near Ain Issa, Raqqa, Syria May 19, 2017 (Photo: Reuters /File Photo)

Medecins Sans Frontieres (MSF) warned that the number of people fleeing Raqqa is growing rapidly.
About 10,000 civilians have fled to a camp just north of Raqqa with hundreds more arriving each day as the battle for the city nears, MSF said Thursday (June 1).
Residents are escaping Raqqa under cover of night as US-backed forces close in, taking their chances against minefields and hostile fighters rather than risking death in a major battle expected to begin soon, Reuters reported.
"It is not a massive exodus, but about 800 people a day are arriving in Ain Issa every day," Natalie Roberts, an emergency doctor from MSF France who had just returned from the region, told reporters.
The camp in Ain Issa village is run by the US-backed Syrian Democratic Forces (SDF), which is made up predominantly of PKK-affiliated Kurdish People's Protection Units (YPG) and run by the Kurdish Democratic Union Party (PYD), who have now arrived to within 3 km (2 miles) of Raqqa.
__new_in_first_article1__
The camp has expanded to beyond its 6,000-person capacity, Roberts said.
Conditions have deteriorated especially due to the summer heat. The United Nations and other aid groups have yet to establish themselves in the zone, she said.
MSF is providing basic care including vaccinations, maternity care and treatment of chronic conditions. People with war wounds, mostly caused by mines, are being sent to three MSF hospitals further north, Reuters reported.
It is unclear how many people remain in Raqqa. The city's population was estimated at 200,000 before the recent departures.
Roberts said that the city's hospitals would not be equipped to handle the sort of injuries resulting from an intensification.
قيم هذا المقال 8 0