Erdogan: We will not be silent as 'terror state' is founded in north Syria 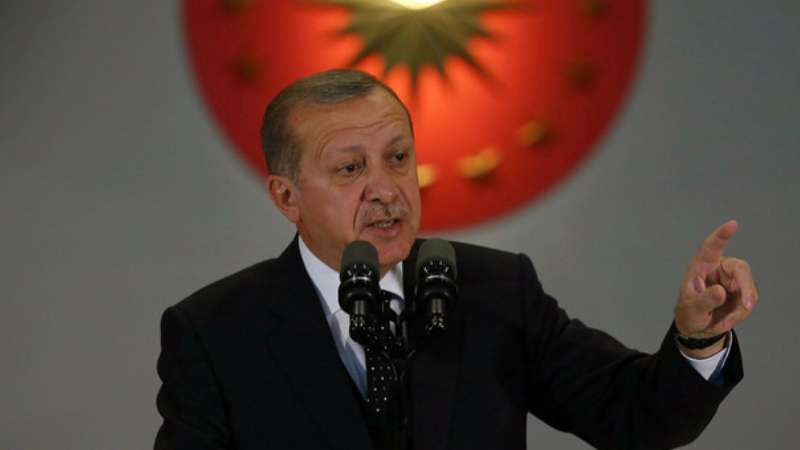 President Recep Tayyip Erdogan (Photo: AA)
Orient Net - Agencies
President Recep Tayyip Erdogan said late Thursday (June 1) in a mukhtars (local officials) meeting in the Presidential Complex that Turkey would not stay silent on a "terror state" being founded in northern Syria.
Referring to the PKK's Syrian affiliate, the PYD terrorist group, Erdogan said that Turkey would make its borders and its hinterland safe from terror. "Those expecting to see us stay silent on a terror state being founded before our eyes will be sorry," he said, adding, "such an attitude will mean they have not understood Turkey's character and stance," Daily Sabah reported.
"Once upon a time, they succeeded in hindering our anti-terror operations via their middlemen embedded in our security forces, but those days are over," Daily Sabah quoted him as saying, in an open reference to the Gulenist terror group (FETO).
Plans of building walls along Iran, Iraq borders
The Turkish President then pointed out that his country plans to build walls along its borders with Iraq and Iran, similar to the one currently being erected along the frontier with Syria.
Erdogan said on Thursday that Turkey has so far completed the construction of a 650-kilometer (403-mile) stretch of the wall along the 911-kilometer border with Syria, AP reported.
Turkey began building the wall in 2014 to boost its security by preventing infiltrations of Kurdish and ISIS terrorists as well as refugees from Syria. Erdogan said Turkey aims to build along its entire border with Syria.
"We will do the same along the Iraqi border and in appropriate places along the Iranian border," AP quoted him as saying.