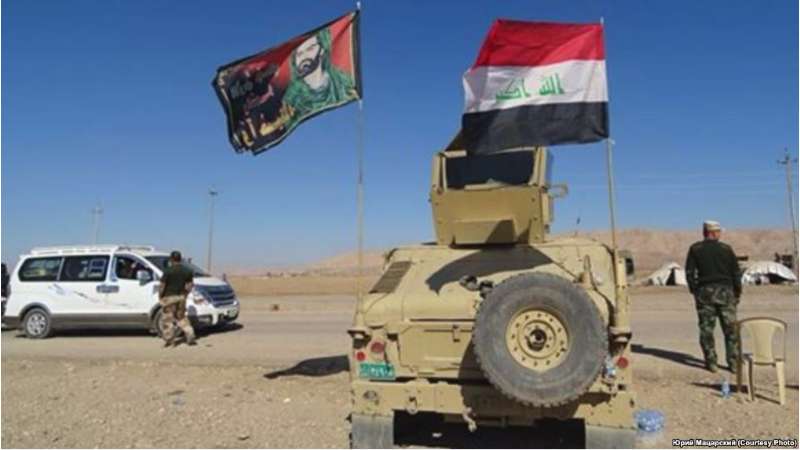 Popular Mobilization Forces raising sectarian banners
Orient Net
An Iraqi Shia terrorist force backed by Iran has said it pushed ISIS terrorists out of villages on the border with Syria on Monday (May 29), in a step toward reopening a supply route to send Iranian weapons to Assad regime.
For the Popular Mobilization Forces (PMF) occupying the territory is a step toward achieving a linkup between Baghdad and Assad terrorists in Syria, reopening a critical highway for supplying weapons to Assad army, and giving the Syrian dictator an advantage in continuing his killing of Syrians.
"This will be the first step to the liberation of the entire border," said Ahmad al-Asadi, a spokesman for the Iranian-backed militia.
But the Baghdad Shia forces backed by Iran cannot as yet link up with the Assad Army and allied Iranian-backed militias in Syria, as Assad terrorists have not as yet reached the Iraqi border from the Syrian side, despite concerted attempts in recent weeks.
To get there, they would have to pass through territory held by US-backed PKK-affiliated Syria Democratic Forces that the US military has been training to fight ISIS.
Iraq's Iranian-backed militia leaders say they are ready to move inside Syrian territory to assist Assad in battling opposition groups there.
It is not known whether the Syrian Kurds would allow the Iraqi Shia force to use their territory to reach Assad terrorists, however, which are deployed further south and further west.
The PMF is taking part in the US-backed Iraqi campaign to defeat ISIS in its Iraqi stronghold of Mosul and surrounding Nineveh Province.
Eight months into the Mosul campaign, ISIS terrorists have been dislodged from all of the city except an enclave by the western bank of the Tigris River.