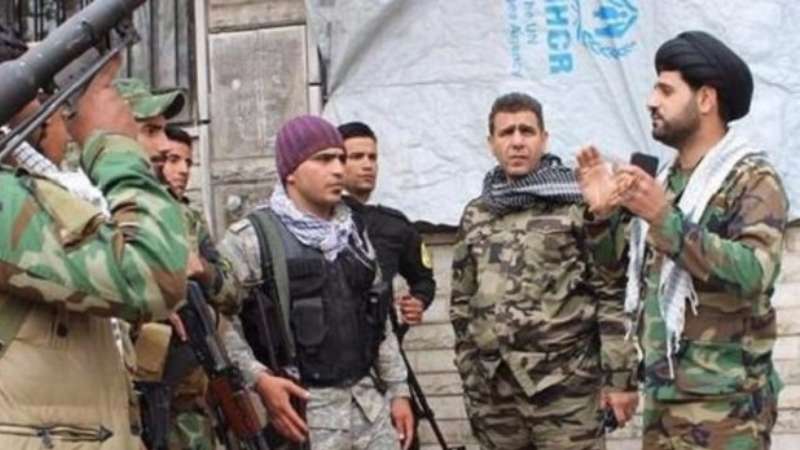 Iran-backed Shiite militiamen, including a religious figure, in Damascus (Photo: Harakat al Nujaba)
Orient Net
The Assad regime has asked Iran to take over the supervision and payroll of thousands of Shiite militiamen fighting alongside Russian and regime troops in support of Bashar Assad, according to a source and a news report.
The pro-opposition Syrian news website Zaman Al Wasl reported that it obtained a “defense ministry” document saying the Assad regime has approved a plan to give Iran responsibility for paying foreign militiamen – mostly Shiites of varying nationalities.
Shiite militiamen mostly are paid in cash from Iran, the Assad regime and pro-Iranian Hezbollah, according to analysts.
Iran would foot the bill alone in the future, an Assad regime official told VOA on the condition of anonymity, confirming the Zaman Al Wasl report.
“The number of Shiite militia has increased dramatically during the last two months,” the official said, adding that while a big part of these militia were recruited by Iran, another one was recruited by the regime directly.
The official spoke about more than 50,000 militants from different nationalities. As a result, the official told VOA, the Assad regime requested that Iran be the provider of cash for all of the mentioned militias.
The document from Zaman Al Wasl put the number of men to be paid for at 88,733. Analysts estimate that about 10,000 Iranian combat troops are in Syria fighting alongside thousands others from Lebanon's Tehran-affiliated Shiite militia of Hezbollah and assorted Shiite militia made up of renegade Pakistanis, central Asians and other nationalities.
Since January 2013, more than 1,000 members of Iran’s Quds Force or other Islamic Revolutionary Guard Corps (IRGC) units have been killed in Syria.
Asserting its military prowess would help Iran push its political agenda in the region, some analysts believe, but unifying pro-Assad militiamen under Tehran’s umbrella could make things worsen in the region as a whole, analysts say.
(Adapted from a news story published by VOA)