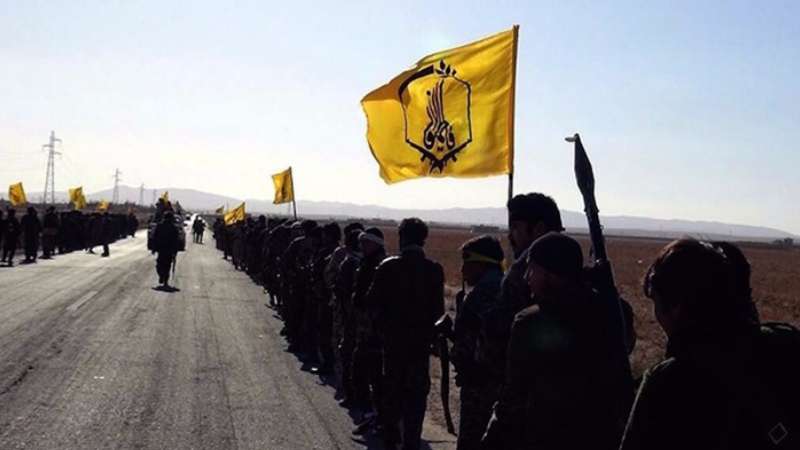 The Fatemiyoun militia, under the command of the IRGC, sent to Syria to fight the Syrian people. (Photo: Tasnim News Agency)
Orient Net
Five mercenaries from the Pakistani Zeynabiyoun militia and one from the Afghan Fatemiyoun were buried on Thursday (May 25) in the Iranian city of Qom, after fighting in Syria alongside Assad terrorists, War Reports reported.

The Iranian research group, which specializes in keeping count of those killed from the Iranian Revolutionary Guard (IRGC) militia fighting in Syria to bolster Assad and increase Iranian influence on the ground, published a number of photographs of burial ceremonies that took place last week in Iran, showing the ever-increasing number of foreign Shiite militants killed in Syria as Iran attempts to hide the actual death toll.
In addition, pictures of two other Pakistani mercenaries were published by the website on Wednesday showing a burial ceremony taking place in the same city.
The research group also revealed that an Afghan child was recruited to fight in the ranks of the Fatemyoun militia in Syria and was buried on Monday in the Iranian city of Qazvin.

With the outbreak of the Syrian revolution, Iran resorted to recruiting foreign Shiite mercenaries to fight on its behalf against the Syrian people. According to observers, Iran sought the same tactic in Iraq, however, it created a local Shiite militia to fight on its behalf in Iraq, unlike in Syria.
Iran created Zeynabiyoun militia by recruiting Pakistani mercenaries, majority of whom come from Pakistan’s Kurram tribal region – home to several Shiite tribes, including Toure and Bengch.
While the Fatemiyoun militia is made up of Afghan Shiite mercenaries, most of whom hail from al-Hazara, a tribe that lives in central Afghanistan. Its people carry the Afghani citizenship, however, their primary language is Persian.
In May 2015, the Fatemiyoun commander Ali Reza Tusley was reported killed in Syria.
These foreign Shiite militias fight under the umbrella of the IRGC.
Observers say that these mercenaries come to fight in Syria in exchange for Iranian promises of high salaries (about 500 US dollars per month), compensation for their people if they are killed and a settlement of their legal status within Iran.
Most of them have entered Iran illegally, which has made them an easy target for the IRGC to blackmail.