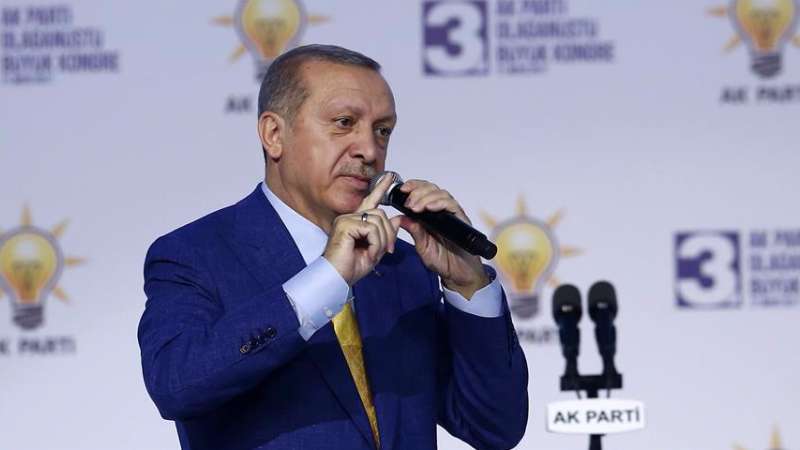 Erdogan speaking at the AK Party extraordinary congress in Ankara, May 21, 2017 (Photo: AA)
Orient Net
Turkish President Recep Tayyip Erdogan on Sunday (May 21) rejoined the ruling Justice and Development (AK) Party and was elected as chairman, the state-run Anadolu Agency (AA) reported.
Erdogan was elected to re-preside the party with 1,414 votes by party delegates.
The Turkish leader promised his people, in a speech after being elected as AK Party chairman, with a spring-like ear on multiple levels including the fight against terrorism, economy and personal rights and freedoms.
"The trouble which is suffered on the way to the nation’s service is no burden but an honor," he said.
Erdogan also said that the country’s ongoing state of emergency will not be lifted until Turkey achieves peace and welfare. The state of emergency was imposed on July 20 last year, after the July 15 deadly coup attempt.
Erdogan led the AK Party for 13 years, since the party’s foundation in 2001, but had to step aside when he became president in August 2014, because being “politically neutral” was then a legal requirement for a president in Turkey.
Less than three years after giving up the post, a revised Constitution, passed in a public referendum last April, gave Erdogan the chance to rejoin the party at an extraordinary party congress in Ankara.
During the extraordinary congress, some articles in AK Party’s bylaws were also changed, according to AA.
The new Constitution restores to presidents the right to belong to a political party, a right enjoyed by Turkey’s first three presidents, including republic founder Mustafa Kemal Ataturk.