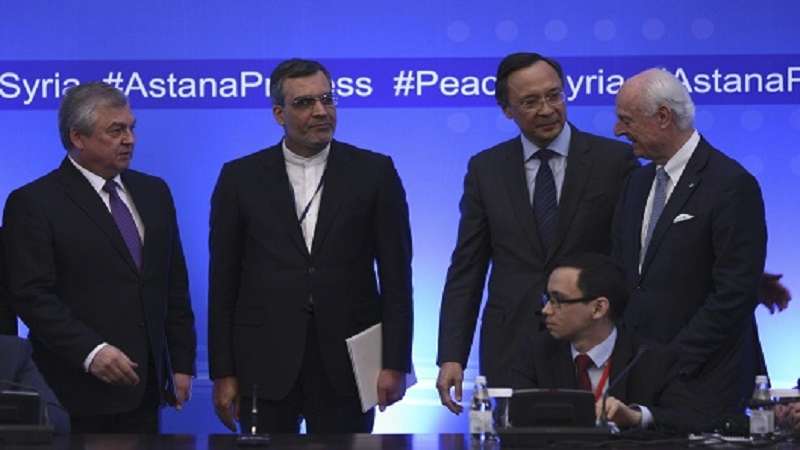 The fourth round of Syria peace talks in Astana, Kazakhstan, May 4, 2017 (Reuters)

On May 4, 2017 in Astana (Kazakhstan) Iran, Russia, and Turkey signed a memorandum “on the creation of de-escalation areas in the Syrian Arab Republic.” Four such areas were listed: “Idlib province and certain parts of the neighboring provinces (Latakia, Hama, and Aleppo provinces); certain parts in the north of Homs province; in eastern Ghouta; [and] certain parts of southern Syria (Daraa and Al-Quneitra provinces).” Russian Foreign Minister Sergei Lavrov will seek the support of his American counterpart––Secretary of State Rex Tillerson––for this ceasefire undertaking in a visit to Washington today, May 10th.
The view here is that the initiative merits study and possible support. It aims to eliminate hostilities in the designated areas (which are supposed to be mapped in detail by the three “Guarantors” by June 4, 2017) for a minimum of six months and to facilitate humanitarian access for basic human needs and restoration of vital infrastructure. Within the de-escalation areas “conditions for the safe and voluntary return of refugees and internally displaced persons shall be created.”
Anything that reduces Syria’s appalling human suffering anywhere in the country merits close and sympathetic consideration. Although two of the three Guarantors (Iran and Russia) have facilitated a multi-year campaign of collective punishment and mass homicide by their joint client, Bashar al-Assad, the possibility that they now wish to arrest the destruction of the Syrian state cannot be ruled out. Indeed, the proposition is worth testing.
By May 18, 2017 the Guarantors are supposed to form a “Joint Working Group” to delineate the lines of de-escalation zones and related security zones. Critically, the three parties also agreed to “take all necessary measures to continue the fight against DAESH/ISIL, Nusra Front and all other individuals, groups, undertakings and entities associated with Al-Qaeda or DAESH/ISIL, as designated by the UN Security Council within and outside the de-escalation areas.” How this provision plays out in practice will determine whether the initiative itself is worthy of support.
Of the three Guarantors, to date only Turkey has expended serious effort against ISIS (ISIL, Daesh, Islamic State). And since its military intervention in Syria in September 2015, Russia has joined the Assad regime in terrorizing Syrian civilians and targeting anti-Assad rebels under the pretext of fighting both ISIS and Al Qaeda (Jabhat Fateh al-Sham – formerly the Nusra Front). The real question is whether Russia and the regime––supported on the ground by Iranian-led Shia militiamen from Lebanon, Iraq, and Afghanistan––will use the ISIS and al-Qaeda exemption in the tripartite memorandum to continue their civilian-centric campaign of mass homicide.
__new_in_first_article1__
Recent reports of Russian military aircraft resuming their attacks on hospitals and clinics in Idlib Province suggest that Moscow, in the context of the de-escalation scheme, may aim to pacify areas where the regime and its foreign fighter supporters have a strong ground presence, while working with Assad to perpetuate mass civilian terror in the contested northwest of the country and elsewhere. The tripartite memorandum forbids the use of “aerial assets” in the “de-escalation areas.” It is silent on the grounding of Assad’s air force anywhere else in Syria.
This silence is deafening. It leaves the regime free to resume air operations aimed at terrorizing civilians trying to survive in rebel-held areas. Presumably the regime will not employ chemical weapons: the American reaction to the April 4, 2017 sarin attack on Khan Sheikhoun got the attention of Assad and his foreign enablers, at least one of which (Russia) knew of the attack in advance and did nothing to stop it. But there is nothing in the tripartite memorandum that would prevent the regime and Russia from doing their worst to civilians with non-chemical means, including barrel bombs, and incendiary munitions.
Still, the presence of NATO ally Turkey among the Guarantors dictates that the de-escalation plan be studied carefully. Its potential success in dampening violence, protecting civilians, and establishing a basis for genuine political transition talks in Geneva will be maximized if the Trump administration makes it convincingly clear to Mr. Lavrov that the United States will not be idle if the mass slaughter of Syrian civilians––a recruiting gift for extremists everywhere on the globe––resumes.
If mass terror does resume, Washington should engage regime targets at times and places of its choosing. If Russia opts, as it has in the past, to supplement the criminal activities of its client then its pilots should, at a minimum, be obliged to deal with Syrian rebels employing effective air defense. The free ride for mass murder must end. And if Moscow is serious about preserving the Syrian state, it should persuade Iran to remove from the country the hordes of undisciplined foreign fighters it has introduced.
This de-escalation initiative may indeed save lives and enable the real Syrian opposition to confront al-Qaeda and ISIS. But it will not succeed because of Russian, Iranian, or regime decency and good will. If the Trump administration perpetuates the AWOL in Syria policy of its predecessor, this initiative will fail and extremists−notably the Assad regime and its al-Qaeda and ISIS partners in crime−will be the winners.
Frederic C. Hof (Atlantic Council)
قيم هذا المقال 28 0