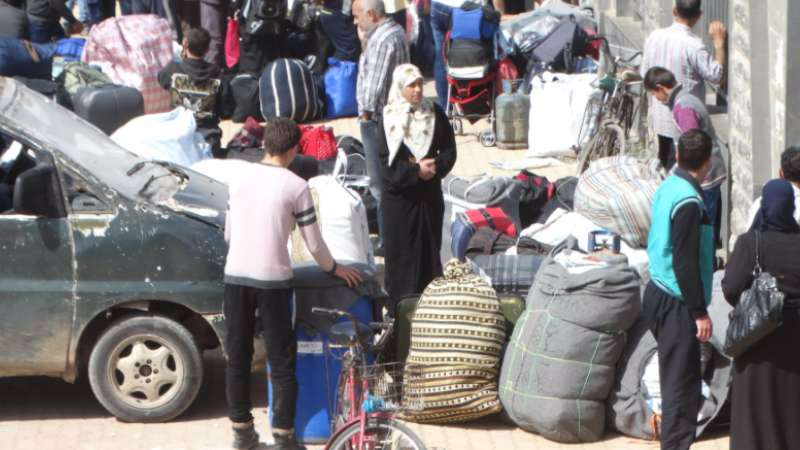 Al-Waer residents waiting with packed belongings before boarding buses, Apr.30, 2017 (Photo: Orient)
Orient Net
The forced displacement of residents form the besieged neighborhood of al-Waer in Homs resumed on Sunday (April 30), as buses left northward heading to Idlib province.
Orient News correspondent Judy Arash said that the estimated number of displaced families in this batch is 561, with a total number of 2204 people. Arash gave further details about the total number, saying that it includes 731 men, 610 women, 714 children and 149 infants.
This is batch the 7th batch, Juday also said, explaining that another 5 batches are left before the whole process is complete. Two of the remaining batches will head to Jarablus city, on the Syrian-Turkish border, while the third’s destination will be to Idlib province. As for the last two batches, the first will head to Idlib province and the second to Homs northern countryside.
Activist-run Homs Media Center said it was agreed that civilian vehicles would be allowed to leave the neighborhood, even if their owners were on Assad regime’s hit list. The vehicles may be sold or transferred to another owner, but within the time limit of one month.
The previous batch of al-Waer neighborhood’s IDPs left on Monday (April 24) to Jarablus.
The forced displacement of al-Waer population started mid-March after a Russia-brokered deal with the Assad regime following a severe campaign of carpet-bombing on al-Waer, killing and injuring dozens.