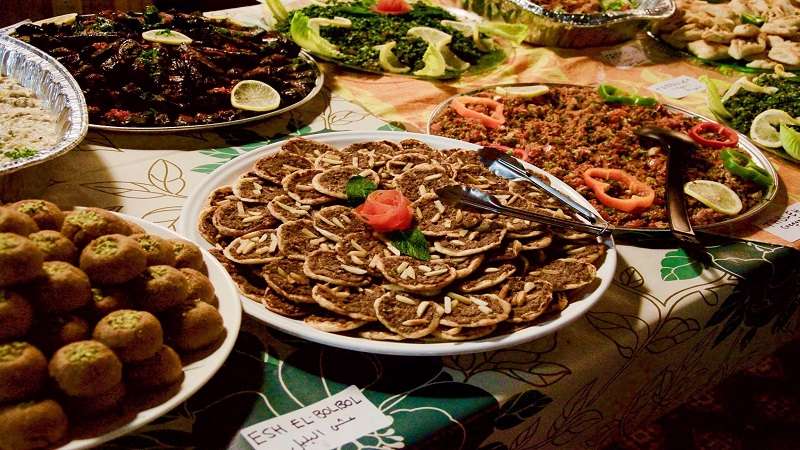 Tayybeh pop-up dinners hosted at a different location about every 4 months (Dima Yassine)
Orient Net - Ruthanne Sikora
Food has always played an important role in Syrian society and a group of Syrian refugee women now living in Canada have found a way to share their ethnic cuisine with others in their host country and subsidize their household incomes at the same time.
The women, who come from a variety of backgrounds, call their culinary initiative ‘Tayybeh’ (an Arabic word meaning ‘kind’ or ‘delicious’) and have been hosting pop-up dinner events around Vancouver since the end of last year.
The event’s organizers told journalist Masa Kanaan in an article published by Al Arabiya English on April 8th that the Tayybeh dinners quickly became popular with the citizens of Vancouver and “tickets are being sold out in 15 minutes or less.”
They feature a large number of Syrian dishes including stuffed vegetables, fattoush and tabbouleh salads, specialty rice platters, several kinds of kibbeh (a dish made of bulgur, minced onions, and finely ground lean beef) and delicate pastries.
Hosted at a new location approximately every four weeks for more than 100 guests at a time, the women work together to prepare the meals and make sure they provide an exhaustive menu so that every guest is sure to find something that appeals to his or her palate.
Before the war that disrupted the lives of millions of Syrians and forced them to flee from their homeland, the country was a rich mixture of different cultural backgrounds, religions and traditions.
Major cities like Damascus, Aleppo, Homs and Hama each had specialty foods they were known for and often there existed a friendly rivalry among regional cooks.
Although the women of Tayybeh come from a variety of geographical and political backgrounds, the fact that they are all Syrian refugees living in a strange new land has bound them together.
“The situation facing newcomers from Syria is difficult and precarious given the language, cultural and networking barriers,” Tayybeh organizer Nihal Elwan told Al Arabiya English.
The initiative has provided an opportunity for the women to develop friendships as well as partnership in a business opportunity that is beneficial to all.
“Tayybeh is a way to encourage the women to not only produce some of their delicious food and present it to the community, but to also make some money and expand their networks.”
“Without Tayybeh, many of these women wouldn’t have met and watching them develop friendships has been beautiful for me, personally,” Elwan told Al Arabiya English.
Many of these women had never held a job before and Tayybeh has provided them with the opportunity to add ‘family breadwinner’ to their personal resumes.
“Some of these women have never worked in Canada, obviously, and some have never worked in their lives ... We come from a background where gender roles are somewhat set and somewhat stereotypical. It is really beautiful to watch this shift and the men [in their community] are coming out to support them.”
In addition to the opportunity that Tayybeh provides these women for supporting themselves and their families, the initiative also opens doors for serving others which is something the innate hospitality of Syrians does so well.
“Cooking is my passion and Tayybeh has helped me do something I love to do for others besides my family and home,” Hasna el Sheikh Omar, one of Tayybeh’s six chefs, told Al Arabiya English.
“We are presenting ourselves to Vancouver and British Columbia through our family recipes and our cuisine.”