71st anniversary of Independence Day: Awaiting for Syria to be free again

71st anniversary of Independence Day: Awaiting for Syria to be free again 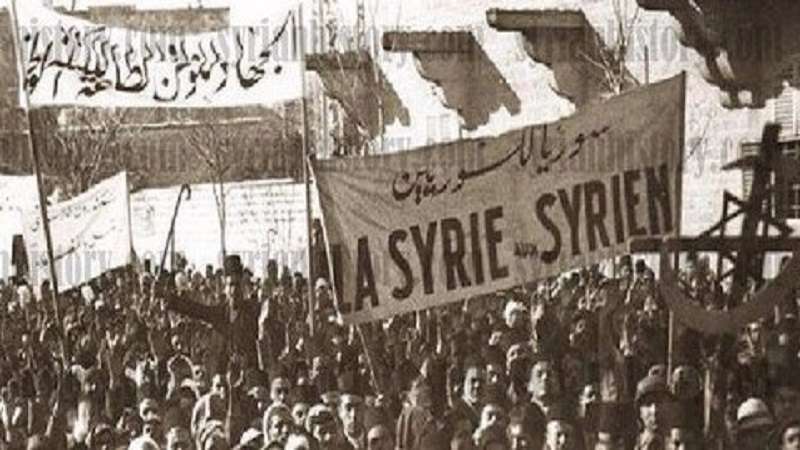 Celebrating Syrian Independence Day in 1946 (Photo: Syrian History)
__new_Underarticle_image_EN__
Orient Net - Yasser Ashkar
Monday, April 17, was celebrated by the Assad regime as the 71st anniversary of Syrian Independence Day, a national holiday that commemorates the end of the French mandate and the country’s proclamation of full independence.
But for the past six years, no Syrians outside of the brutal regime and its supporters have been doing much in the way of celebrating Syria’s independence.
Instead of celebrating we have been emulating the struggle of our ancestors who achieved their independence through resistance to the brutality of foreign occupiers.
But the brutality of the French cannot even come close to Assad’s which has resulted in many Syrians wishing they could return to the days of the French occupation which in hindsight is seen as a time that allowed for far more personal freedom and independence than the days under Assad rule that have resulted in the torture and deaths of more than half a million Syrians.
During the French occupation, education and culture were prioritized along with improving the country’s infrastructure. It was during the French occupation that Syrians saw the building of many schools and the development of the Chemins de fer Syriens, CFS railway lines that once ran from Lebanon through Syria to Saudi Arabia and into Turkey.
In 1937, the French administration started major construction and infrastructure works, including urban development in Damascus and Aleppo and roads and schools throughout much of the country. At the same time, French “cultural colonialism” was intensified, for example in the school system, the arts, the press and social activities.
Although the French encouraged economic growth and brought many improvements to Syria, Syrians demanded their independence.
But if the French “left their fingerprints everywhere”, as one former Aleppo resident recently said, it is difficult to not view them in a positive light compared to the boot prints being made by the Assad regime and its foreign allies.
__new_in_first_article1__
Whereas the French brought their language and a love of their culture and the arts, the Iranians have infiltrated the country at the invitation of Assad and brought foreign militias in to help him remain in power at the expense of Syria’s legitimate citizens.
Whereas the French improved the infrastructure in ways that benefited the Syrian people, the Russians have brought in weapons that are being used to destroy the infrastructure and kill Syrians and drive them out of their own country.
Whereas the French response to the rebellion of 1925-26 throughout Syria was the systematic air and ground-based shelling and bombing that resulted in the deaths of about 5 000 Syrians – in comparison to today’s population numbers this would represent about 25 000 dead – Assad’s response to the peaceful rebellion staged by Syrians in 2011 has resulted in the deaths of close to 500,000, even though UN officials stopped counting years ago.
And the death count continues to rise with no end in sight as the shelling by regime and Russian warplanes on civilians escalates daily.
What kind of “independence” is this for Syrians?
What is the meaning of “independence” if it leads to being crushed to death under your own home by your own government, if it means being forced into leaving behind everything you have ever known just to stay alive, if it means spending the rest of your life without limbs, or with permanent disabilities, as is the case for millions of Syrians injured by bombs dropped by men with no conscience?
What good is “independence” from foreign occupiers from the west if it means being crushed under the boot heels of foreign occupiers brought in by a dictator only interested in maintaining his stranglehold on the country even if it means driving half the population out of their own homes and killing as many Syrians as it will take to crush their spirits along with their struggle for freedom and dignity?
So even if the Assad regime continues to celebrate April 17 as Syrian Independence Day, those of us who have not known the meaning of independence, justice or freedom will withhold our own Syrian Independence Day celebration until the day our country has been freed from the clutches of Assad and all the terrorists who have flourished in Syria under his watch.