Turkey’s referendum and its Syria result 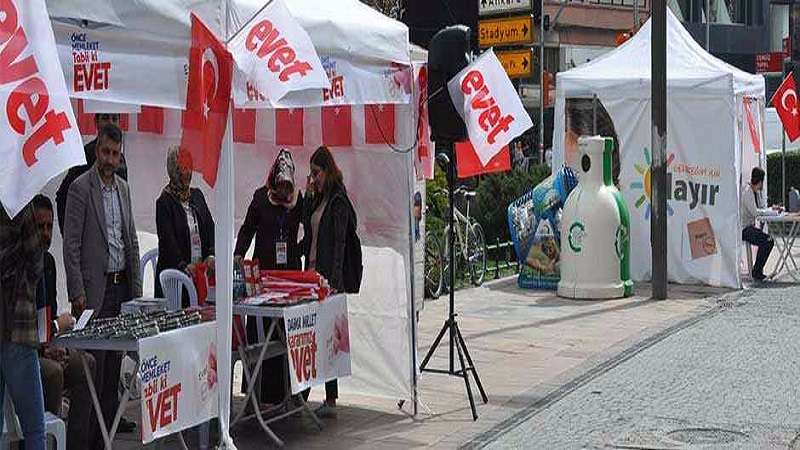 (Photo: Anadolu Gazetesi)
Yunus Paksoy
More than 50 million Turkish citizens are eligible to cast their votes on the constitutional changes this Sunday. Having been brought to the Turkish Parliament by the ruling Justice and Development Party (AK Party) and the Natioalist Movement Party (MHP), the constitutional changes were ratified by President Recep Tayyip Erdogan on February 10.
Both YES and NO supporters have been campaigning for more than two months now. Looking at the poll results, almost all predict a win for Erdogan and the AK Party.
In the history of the Republic of Turkey, there was only one case when people voted for “No” in the ballots. Sunday’s results will show if the people will decide to steer the country into a new period.
It has become an undeniable fact that every development in Turkey affects the people of Syria as three million of them are currently taking shelter in the country. I wrote previously that a recent strife between Turkey and the European Union had the ability to affect Syrians as Ankara threatened to open the gates to Europe for those willing to cross into the Schengen zone.
It is also a reality that there will be a different Turkey on the morning of April 17 whether the YES or NO votes prevail.
We already know that tens of thousands of Syrian citizens who have sought refuge in Turkey may be granted Turkish citizenship in case the YES votes prevail. Deputy Prime Minister Veysi Kaynak announced late in February that some Syrian refugees living in Turkey “will be granted Turkish citizenship after the April 16 referendum.”
Also, Istanbul Governor Vasip Şahin said that the applications of some Syrian refugees “will be considered after the April 16 referendum.”
If the NO votes were to outweigh the YES votes on April 16, the chance for Syrians to be granted citizenship would drastically shrink.
The referendum result will determine the fate of Turkey’s cross-border operation as well. Ankara announced on March 31 that Operation Euphrates Shield, which was launched on Aug. 24, 2016 and helped the Free Syrian Army (FSA) liberate ISIS-held Jarabulus, Dabiq and al-Bab, was concluded successfully.
However, Ankara is adamant on retaining its position within Syria. Also, Turkish authorities have already made their intenion known to move towards Democratic Union Party (PYD)-held areas such as Afrin and Manbij or Daesh’s so-called capital Raqqa.
The Turkish president has recently said few days ago that Ankara has two targets in Syria: Manbij and Raqqa.  ’’We have two important targets in Syria, which are Manbij and Raqqa. If the U.S. and coalition forces sincerely cooperate with us, we would support them both in Manbij and Raqqa,’’ the president stated.
President Erdoğan is likely to step up efforts on the ground in Syria if he passes the referendum test, emerging stronger from the ballots.
A stronger Erdoğan is highly likely to stand firmer and more adamant in the face of Syria’s brutal dictator Bashar Assad as well. While we are in such a significant phase when Assad must immediately go, a stronger Turkish president will benefit Syrians.
This Sunday will not only crucial for Turkey, but also for the whole Middle East region, particularly Syria.
--------------------------------------------
Yunus Paksoy is the chief reporter of the Istanbul-based Turkish newspaper DAILY SABAH. Paksoy has covered Turkey’s Operation Euphrates Shield in Syria and the Mosul Operation in Iraq and focuses on developments in Syria, the Middle East and Turkey’s southeast.