Trump’s Syria strikes: A message to Assad or to Americans? 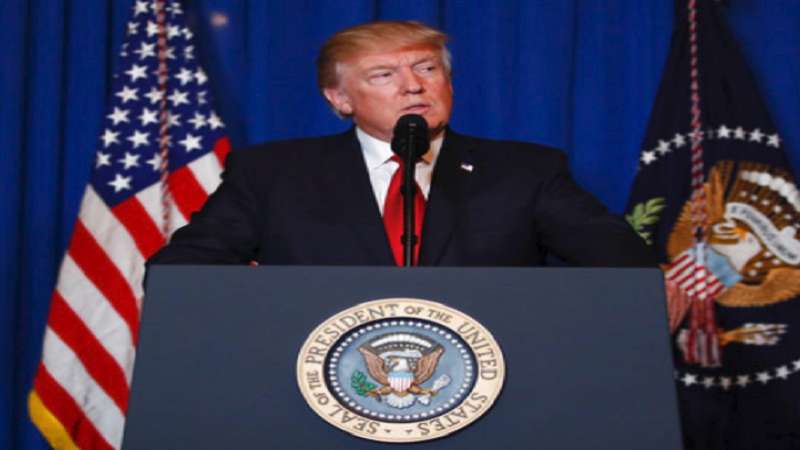 US President Donald Trump (Photo: AP)
Orient Net - Ruthanne Sikora
Reactions to the US missile strike on a Syrian airbase have been varied among Trump supporters and opponents alike — not only in America, but around the world.
The military action that was said to have been in response to the Assad regime’s use of chemical weapons on civilians has also provided political analysts and activists, as well as many people who previously showed little interest in the plight of the Syrian people, with much fodder for debate.
To say that Trump’s decision to strike Syria came as a surprise to most is an understatement.
And the resulting overload of information and misinformation, mixed with strong emotional reactions and much speculation, has produced far more questions than it has answers.
Was it merely a coincidence that it came just hours after Secretary of State Rex Tillerson made a statement to the press saying that the removal of Assad from office was no longer considered a priority by the Trump administration?
Trump’s spokesmen now say that photos and videos of Syrian children suffering slow deaths by paralysis and asphyxiation changed his thinking and that may very well be true.
It is not unreasonable to think that after several months in office the realization that the things he says and does as president of the most powerful nation on earth do indeed have a profound effect on the lives of people around the world.
The premise of putting “America First” — of the assumption that the consequences of decisions made in America, stay in America — is not a sound one in an increasingly more connected global world.
Even so, many Trump critics do not believe in his ability to change. Instead, they accuse him of using the tragic events in Khan Sheikhoun as an opportunity to deflect attention from his own political troubles which resulted in his presidential popularity ratings dropping to an unprecedented low.
While many of the voters who helped put him in office strongly disapprove of the military action taken in Syria, many Americans who did not are now praising him for taking a stronger leadership role than his predecessor.
Although motivation does play a role in determining the morality of Trump’s decision, the fact that he is capable of changing his mind should be viewed in a positive light.
Even though the tragic chain of events that followed Obama’s unwillingness to hold Assad accountable in 2013 diminished the stature of the US as a dominant world power, he remained stubbornly committed to his policy regarding Syria in spite of repeated attempts by many, including members of his own Sate Dept, to convince him to reconsider.
On the other hand, in a move that we can only hope is not merely another political ploy, the arrogant blustering and rhetoric of Trump’s campaign — that continued to be his shtick even after taking the oath of office — appears in the past few days to be giving way to a more thoughtful approach when addressing the American people and the world at large.
But while he was observed on a Florida golf course on Saturday — presumably unwinding from a tough week on the job — Russian warplanes resumed targeting civilians in the area of Khan Sheikhoun.
Whether as retaliation for the missile strike or as a matter of Assad and his allies getting back into their regular routine, the suffering of the Syrian people continues and so far there are no signs that the Trump administration has come up with any comprehensive plan for a change in its pre-strike policy of noninvolvement in Syria.
Admitting to himself and to others that he does not know everything about the Syrian issue would necessarily be the first step towards coming up with an effective plan.
He also needs to decide whether his administration’s ultimate objective is merely changing Assad’s behavior, or facilitating regime change as laid out in the Geneva II protocol..
Although the recent use of chemical weapons appears to have changed Trump’s opinion of Assad, he is far from being a military expert and he must be willing to defer to those who are even though he is technically their Commander-in-Chief.
Robert Ford, who met with Assad many times while he was US Ambassador to Syria, believes that the Syrian dictator understands military messages like the one sent by way of missile strikes on Friday very well because Syria under Assad is itself a military state.
Unlike the verbal warnings issued by Obama, Ford believes that Assad heard Trump’s message to stop using chemical weapons on civilians loud and clear.
Former State Dept. official Paul Bonicelli, agrees. Bonicelli, who served in the Bush administration, told CNN that unlike “the pinpricks Bill Clinton used”, Trump’s military message “was a two by four upside the head.”
But both men agree that without diplomatic follow up the message will be challenged in the future by Assad, and Trump will need to be ready with a response.
Ford told CNN that it is imperative that Tillerson get the Russians to understand that the US is serious about Assad not using chemical weapons, and then Russia needs to be able to convince Assad.
No matter how you look it, that is no small task.
There have been 317 incidents recorded of chemical weapon use by the regime in Syria since 2013, 17 of them since the beginning of this year.
Not all the chemicals being used are as lethal as the latest attack with sarin, but they are heinous and continue to kill innocent civilians just the same.