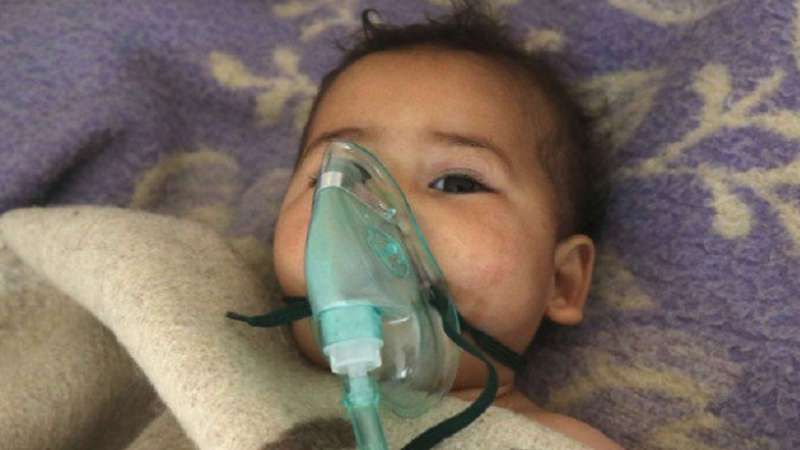 Dozens, including 27 children, killed in Khan Sheikhoun chemical Attack (AFP/Getty)
__new_Underarticle_image_EN__
Hakim Khatib
Six years into war in Syria have proven again and again that it is the worst man-made catastrophe in modern history. According to UN records, more than 400,000 people have died, more than one million injured, while over 10 million have been displaced, triggering a global refugee crisis in neighboring countries and overseas.
It is depressingly hard to admit that half of these numbers are indeed children. As long as violence, displacement and beast-like animosity persist in Syria, children will continue to suffer. According to UNICEF, 8.4 million children have been affected by the conflict. This number makes more than 80 per cent of Syria’s child population. There are numerous daily violations of their rights in the areas of health, education, protection, etc.
No escape
Thousands of Syrian children have lost members of their families and have had to flee their homes to become displaced within Syria or neighboring countries. Others, no more than one in 20 Syrian refugee children, have made a precarious journey, many times alone, crossing the Mediterranean Sea to reach Europe.
The lives of Syrian children have been greatly affected by the conflict. Only yesterday, more than 80 people, including 27 children, 19 women, were killed and about 500 left injured in a chemical attack in Khan Sheikhoun, a city located to the south of the city of Idlib in northern Syria. It is very probable that children are not only affected by a death-causing attack, but also by the haunting violence, loss of family, and the experience of horror surrounding them. Thus, psychological impact of violence on children runs deeper than the physical one.
In a study conducted in a Turkish refugee camp on the educational and mental health needs of Syrian refugee children, more than four in ten showed symptoms of post-traumatic stress disorder. In terms of physical treatment, in addition to disabilities, “three in ten Syrian children” under age of five have not received routine vaccination.
No education
__new_in_first_article1__
According to UN statistics, the Syrian conflict has put 2.8 million children out of school, of which 2.1 inside Syria and 700,000 abroad. The educational system has been crumbling in Syria because armed groups and militias have been targeting schools, students and teachers as a military strategy. One in four schools has been damaged, destroyed or occupied, while five in ten children are out of school
Syria had a relatively strong education system before 2011, with over 90 per cent enrollment of primary school children and 70 per cent of secondary school children.
According to the 2004 census, the literacy rate in Syria was 79.6 per cent: 86 per cent of men and 73.6 per cent of women were literate. In 2002, compulsory and free education was declared from the first to the ninth grade.
In 2016, UNICEF reported that more than two million children do not have access to education within and outside Syria. By 2016, there were a total of 80,000 child refugees in Jordan who did not go to school, according to Human Rights Watch. Percussion of the lack of education are yet to emerge in the near future.
Under siege
There are six million Syrian children who need humanitarian aid and more than two million cannot receive it because they live in areas that are difficult to access or are under siege.
Syrian children are continually exposed to escalating violence and explosive weapon attacks. Some are forced to become child soldiers, while others are forced to work so their families can get by. The crisis has led millions of Syrians to have limited livelihood opportunities and have plunged them into poverty. In Syria and in neighboring countries, Syrian children have been forced to become the main breadwinners of their families.
UNICEF estimates that about seven million children in Syria live in poverty. Child labor was a pre-war problem in Syria, but the resulting humanitarian crisis aggravated it. In both Syria and neighboring countries, children are forced to work in conditions that are mentally, physically and socially dangerous.
__new_in_first_article2__
In addition, the war in Syria is characterized by multiple violations of humanitarian law. Specifically, the current situation goes against the law prohibiting direct or indiscriminate attacks on civilian population, the destruction of hospitals and requiring all parties involved in the conflict to allow access to humanitarian aid.
Sexual abuse
Sexual violence against civilian population has been a feature of the Syrian conflict. The fear of such violence, which increases when the perpetrators of such atrocities are not punished for their acts, has a debilitating effect on vulnerable populations.
In 2015, UNICEF identified 1500 individual cases of serious child rights violations in Syria, over 60 per cent of which were cases of murder and mutilation from the use of explosive weapons in civilian areas. In addition, children are also victims of repression and indoctrination by the regime, ISIS and the opposition. Under Article 34 of the Convention on the Rights of the Child, children must be protected from “all forms of sexual exploitation and abuse”. The Article 489 of the corresponding Syrian penal code, amended in 2013, also protects minors less than 15 years of age from sexual abuse but permits marital rape. In rebel-held areas, such penal codes have not developed yet to offer such protection, at least on paper. The implementation of these articles, however, remains detached from reality.
The Office of the Special Representative of the UN Secretary-General on Sexual Violence in Conflict states “there have been cases of gender-based sexual violence in detention, checkpoints and home registries in Syria.” Sexual abuses have increased not only in Syria but also in hosting countries of refugees, especially among girls less than 18.
This generation, which constitutes more than 80 per cent of Syrian child population, is on the brink to be lost forever.
-----------------------------------------------------
Hakim Khatib is a political scientist who works as a lecturer for politics and culture of the Middle East and journalism at Fulda University of Applied Sciences and the editor-in-chief of the Mashreq Politics & Culture Journal (MPC Journal).