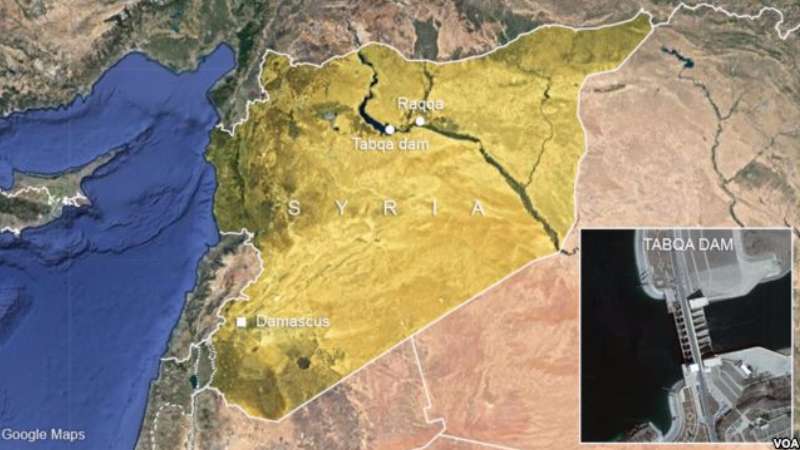 Orient Net
The Syrian interim government published a ‎report about the dangers which might result if ‎PKK-affiliated Syria Democratic Forces (SDF) ‎opened a channel on the river of ‎Bleikh from the Euphrates Dam in Raqqa.
The report depended on a study conducted by experts and technicians in the council of ‎Raqqa. It said that that opening the channel on the river of Bleikh ‎would only reduce 10% of the pressure in the ‎Euphrates Dam. It would also drown 95 of the farmland, because ‎many of the water channels in the area were not ‎completed.‎
The report added that if SDF took that step, 150.000 acres might be ‎damaged for many years to come.
Meanwhile, sources told Orient Net that SDF prevented technicians from solving ‎the problems in the control panel of the Euphrates Dam.‎  ‎
The council of al-Raqqa said that most Syrians ‎who fled the city towards the north had no ‎links with ISIS. They only wanted to leave to ‎safety amid the news of the Dam’s collapse. ‎
The council also said that the UN organizations ‎and humanitarian NGOs did not offer ‎something significant to this major crisis of exodus as their work was ‎surrounded by abuses and denial of access.    ‎
It is worthy to remind that SIS terrorists called ‎upon civilians last week to ‎immediately leave ‎the city of al-Raqqa ‎following the news about ‎the imminent collapse of the ‎Euphrates Dam in ‎al-Tabqa. ISIS terrorists said that the reason of the collapse was the US-led coalition airstrikes on the vital institution.