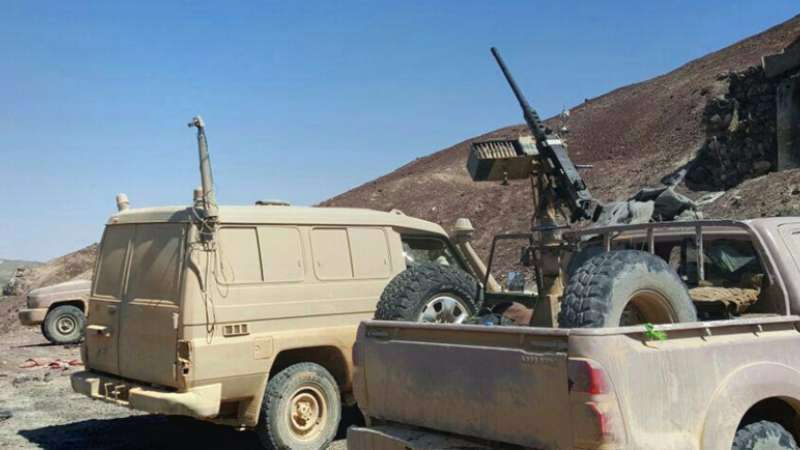 Opposition fighters battling ISIS in Badiyat ash-Sham. (Photo: Jaysh Ossod al-Sharqya)
Orient Net
Opposition fighters announced on Wednesday (March 29) the liberation of the entire region of Damascus countryside from the control ISIS.
Orient correspondent stated that “ISIS militants withdrew today from Jabal al-Mak-hul, Tal Dakwa and its surroundings, al-Qeseb Be’r, al-Seraikhi and Tal al-Dukhan,” following fierce fighting launched by opposition fighters.
In addition, Jaysh Ossod al-Sunna, an opposition group, confirmed on its Twitter account the liberation of Jabal Mak-hul in Badiyat ash-Sham.
For his part, Abu Barzan Al-Sultani, commander of the battle and also deputy commander of Jaysh Ossod al-Sharqya, said that the battles are still ongoing despite the fact that ISIS was driven out of both Damascus and Suweida countryside.
Opposition fighters have been waging fierce battles against ISIS on two fronts. The first one is in Badiyet ash-Sham and the second one is in eastern Qalamoun. The point of the two battles is to bring a meeting point between the two battles and connect the two areas to each other.
The first battle was able to take control of the section allocated in the area of Mahsa (Tibat al-Mahsa), while the second battle launched its phase II and took control of the al-Mahsa junction and Abo Shamat highway and infiltrated the mountains in Badia Palmyra, reducing the distance between the two regions to less than 10 km.
The Joint Operations Room of Battle 1 in al-Hammad area in Badiyat ash-Sham had announced the complete liberation of Sarriyet Scientific Research, Tiss area and Abu Risha dam in the Sis district, in addition to the killing and injuring of several ISIS terrorists.