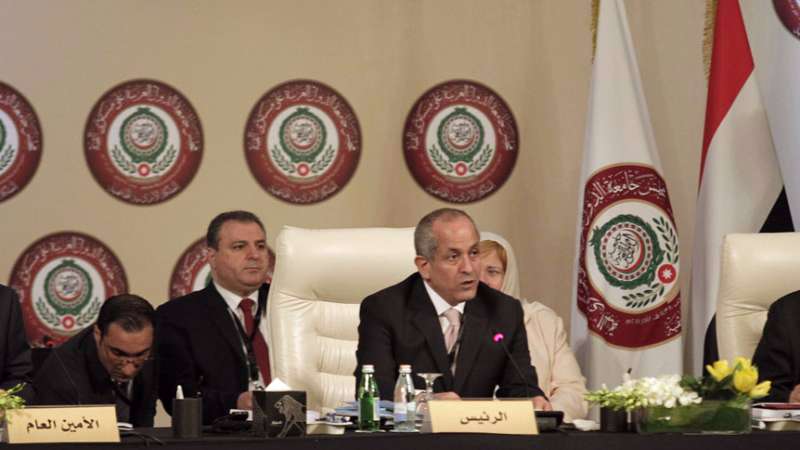 Arab foreign ministers’ meeting in Amman, Jordan. (Photo: Petra)
__new_Underarticle_image_EN__
Orient Net
Arab foreign ministers have endorsed all items included on the agenda of their meeting which they convened in Amman on Tuesday (March 28) ahead of the Arab Summit.
The ministers discussed a number of political, security and economic issues in the region. They submitted the recommendations on these issues to be discussed during the meeting of the Council of the League of Arab States at its 28th ordinary session.
Meetings of the Arab League at the level of foreign ministers kicked off Monday at the Dead Sea shores, in the presence of the Arab League’s Secretary General, Ahmed Aboul Gheit. During the meeting, Minister of Foreign and Expatriate Affairs, Ayman Safadi, assumed presidency of the meeting Egyptian counterpart Sameh Shukri, according to Jordan News Agency (Petra).
Aboul Gheit called for stopping the bloodshed in Syria and ending the war. He stressed that "the Arabs should not remain far from the biggest crisis in the region,” calling on everyone "to work in every possible way to activate the Arab presence in the major crises that dangerously threaten Arab national security.”
__new_in_first_article1__
The ministers also condemned Iran’s interference in Arab internal affairs and rejected Israel’s candidacy for membership of the UN Security Council for 2019 and 2020.
As for the Palestinian issue, Aboul Gheit said that "the international consensus on the two-state solution is clear and firm." Palestinian Foreign Minister Riyad al-Malki told Reuters: "The Palestinian draft resolution submitted to the Arab summit will only oblige all countries not to transfer their embassies from Tel Aviv to Jerusalem without reference to a particular state."
Aboul Gheit then said that the Arab citizen is concerned about the current crises, noting that "no refuge for Arabs but Arabs."
"The Syrian crisis is the biggest crisis in the region, and it should not be left to Western countries to run as they please," he said, stressing the importance of providing support to countries that hosted refugees.