Who speaks for the mothers of Syria in Geneva? 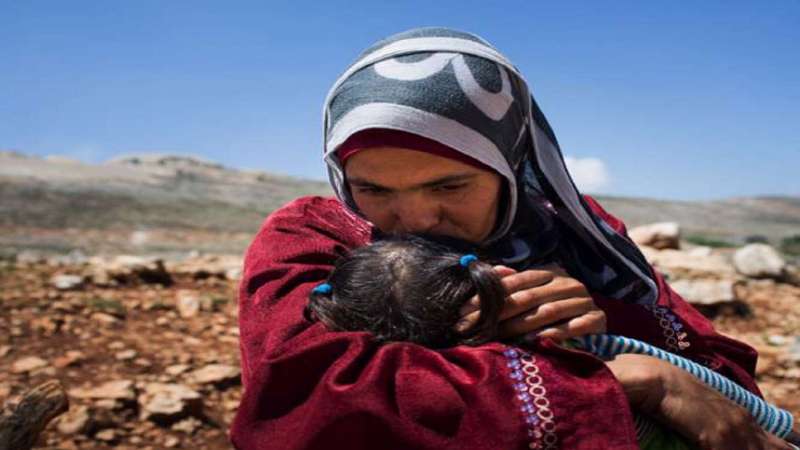 With each year that goes by since the revolution began in 2011, it definitely feels increasingly more inappropriate to wish a Happy Mother’s Day to the mothers of Syria.
Their combined grief for what has happened to their children, as well as for the wanton destruction of their homeland, is a burden that should be shared by the whole world.
But as representatives of interested parties once again convene for another Geneva peace talk to discuss what needs to be done to stop the violence that has been rampant for more than six years in Syria, there appears to be one group of Syrians who have not been granted a proper voice in the proceedings — the mothers of children who have been maimed or killed as well as those who have been unjustly detained and are rotting away in Assad’s prisons.
There is also another category of Syrian mothers who have been ignored and forgotten by much of the world that has failed to acknowledge the reality of their pain — the mothers of those who simply disappeared.
Arabic teacher, Wafaa Othman, said on the day that used to be celebrated annually in Syria with her children; “Mother’s Day for me has become a Day of Pain.”
Othman’s son Ahmad was detained in Damascus more than three years ago and she has not been able to learn anything about him or his whereabouts ever since.
“How can I celebrate this anniversary when my son Ahmad is far away from me and the sorrows and sadness are increasing daily?
__new_in_first_article1__
“I do not even know if he is alive or a martyr!”
Othman, who is now living in Turkey with her daughter, used to make an effort to participate in the many community gatherings and special events that Syrians now living in Istanbul regularly organize in order to maintain a sense of community and connection to their homeland.
Whenever the opportunity to address the gathering would present itself, the grieving mother would speak of her son and the pain she lives with on a daily basis.
But as days turn into weeks, then months and now years, the grieving mother has become withdrawn and no longer finds any solace in gathering with friends.
She has shared her story with them repeatedly after all and how many times can one be expected to hear the same things over and over again without becoming impatient with the telling when there is nothing new to add?
And what words do we who empathize with her sorrow have that could even in a small way help to ease her pain?
When the revolution for dignity, freedom and democracy was in its infancy, and our idealism was still fresh and full of hope, we said words like; “Soon, someday soon Assad will fall and the sacrifices you have made will result in a greater good for all Syrians.”
But to say such things when the world continues to deal with Assad as if his sham of a presidency is legitimate and sovereign is just another form of cruelty and torture for an already tortured soul.
__new_in_first_article2__
Likewise we cannot say that as soon as Assad is defeated those who are being held in his prisons will be liberated as those in the Nazi concentration camps were liberated by the allied forces at the end of WWII.
Instead of being able to offer any credible forms of hope we have instead a dictator devoid of any moral conscience who repeatedly denies that any atrocities have ever been committed in his prisons in spite of the overwhelming mountain of evidence that continues to accumulate and prove otherwise.
In addition, we have an endless stream of conferences and negotiations that have failed to prioritize the issue of detainees in Syria while trying to negotiate peaceful settlements that would have Assad, not only remain in power, but also continue to conduct business as usual without even requiring concessions such as the release of Syria’s arbitrarily detained and disappeared sons and daughters.
During the Geneva IV conference in February a group of mothers whose children were forcibly detained and disappeared in Syria gathered outside the conference center to remind the world, and those who were there to represent a variety of Syrian factions, that their children where not merely statistics.
Led by Fadwa Mahmoud, the group, which calls itself Families for Freedom, assembled in Geneva to speak out on behalf of their children who have been silenced by the Assad regime.
Mahmoud’s son Maher also disappeared along with his father while on their way home from the airport more than three years ago.
As much as it is important to continue gathering evidence of the atrocities and crimes against humanity being committed by Assad and his regime, evidence of torture and secret executions that have been shared by groups like Amnesty International and individuals like the forensic photographer known as “Caesar” who defected from the Assad regime only add to the anguish of mothers who know nothing about the fate of their children.
There is not much comfort to be found in hanging onto the hope that their loved ones may still be alive when being alive most likely means they are still being tortured while the world does nothing to bring it to an end.
قيم هذا المقال 13 0