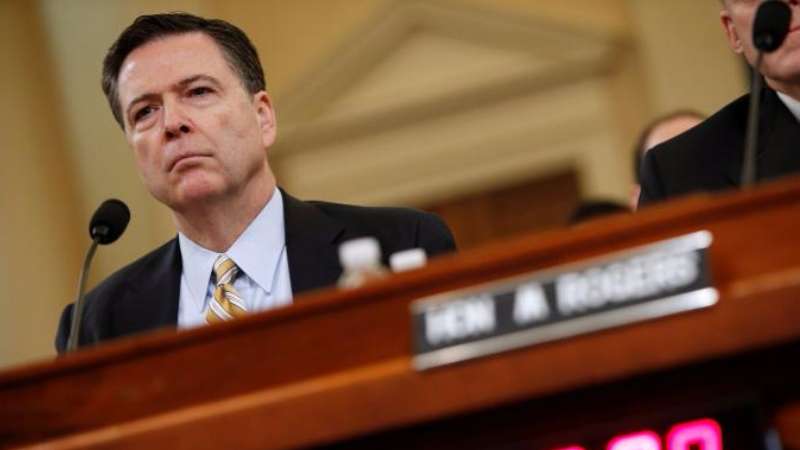 FBI Director James Comey (Reuters)
Orient Net - Reuters
FBI Director James Comey on Monday confirmed for the first time that the bureau is investigating possible ties between Republican Donald Trump’s presidential campaign and Russia as Moscow sought to influence the 2016 US election.
Comey and Admiral Mike Rogers, the director of the National Security Agency, made clear that their investigation of Moscow and November’s US elections could last for months.
Appearing before a congressional panel, Comey also publicly challenged Trump’s claim that former President Barack Obama wiretapped his 2016 campaign headquarters in Manhattan’s Trump Tower.
The two officials spent 5-1/2 hours before the House of Representatives Intelligence Committee in testimony marked by starkly partisan divides between the panel’s majority Republicans and Democrats.
Comey refused to back away from his claim that Russian President Vladimir Putin did not simply want Democratic presidential candidate Hillary Clinton to lose the election; he wanted Donald Trump to win.
Trump created a controversy in early March when he tweeted without giving evidence that Obama had wiretapped his campaign while the businessman competed against Clinton.
"With respect to the president’s tweets about alleged wiretapping directed at him by the prior administration, I have no information that supports those tweets," Comey said.
Leon Panetta, a former US defense secretary and CIA director during the Obama administration, said in an interview that Trump should "acknowledge that he made a mistake, apologize to President Obama."
The committee is one of several in the US Congress investigating whether Russia tried to influence the election, mostly by hacking Democratic operatives’ emails and releasing embarrassing information. Russia denies the allegations.
Comey confirmed the FBI has been investigating since July possible Russian efforts to interfere in the election, including any cooperation between Trump’s campaign and Moscow. He said that while the Russian government wanted to hurt Clinton’s campaign and help Trump’s, intelligence agencies made no judgment on whether the efforts influenced the outcome.
Comey gave no details of the classified investigation and said the fact that it exists does not mean charges would be filed.
US intelligence agencies have concluded that Russia tried to help Trump by hacking leading Democrats.