The US al-Jineh airstrikes – a dead serious precedent! 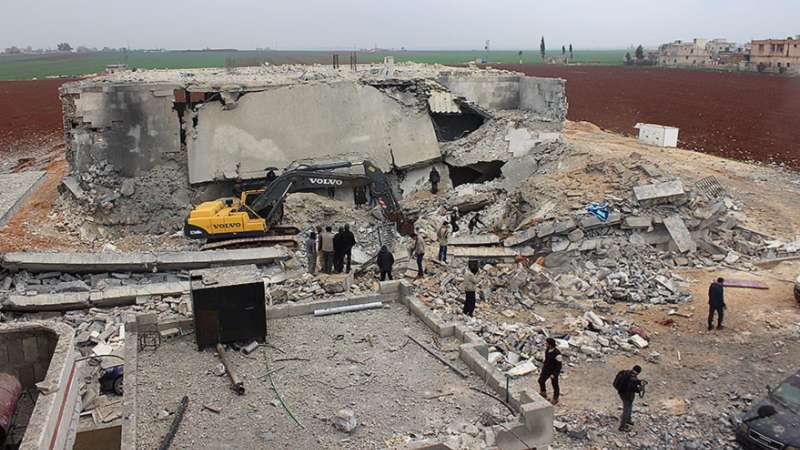 On March 16, 2017 at night prayer time, two US reaper drones conducted several air strikes on the village of al-Jineh. What they hit was a mosque, crowded with praying people some hundred meters south west of the village. The US confirmed the strikes, claiming to have hit “al-Qaeda meeting in Idlib province” and did not hit the mosque itself.
If the statement refers to the airstrikes that killed at least 42 people and wounded up to 200, it is triple false. First, the hit area is located 4.2 kilometers outside Idlib province so still well inside Aleppo province. Second, the aftermath footage of the attack shows that among the dead were a number of civilians, men from the town who attended the evening prayer and did not show signs of arms or militants’ equipment around them. According to local sources, most men were part of Tablighi Jamaat, a conservative but mostly unpolitical and non-violent Sunni movement. Third, the geolocated pictures clearly show that the main mosque building was hit, not nearby smaller and older buildings, used for prayer services for several years now.
According to Paragraph 8 of the 1998 Rome Statute of the International Criminal Court, the deliberate attack on religions buildings, such as the hit mosque, constitute a war crime. And despite the fact that the US withdrew from this statute, it remains without doubt that airstrikes on praying civilians cannot be justified, even if militants might be among them.
This attack, even if possibly also killing a number of al-Qaeda militants, constitutes a new low in the US policy in Syria. US airstrikes killed civilians before but only near the front while US proxies advanced into ISIS-held areas on the ground. The killing of such a high number of civilians, dozens of miles away from the next US-allied force is a precedent that has the potential to further erode Syrian people’s trust in the US and – as it could be seen on social networks – already made many Syrian users condemn the US and equate it to Russian and Assad regime tactics of deliberately targeting civilian infrastructure.
__new_in_first_article1__
On March 17, Russia demanded an explanation from the US about killing dozens of people in the western Aleppo strike. While Russia is in no position to demand the adherence to basic human rights in Syria – as its jets kill civilians in Syria almost every day – its military’s call shows how devastating the US airstrikes on the mosque could backfire. So far, the US has only been responsible for a single digit percentage of the murdered civilians in Syria (3% in 2016 according to SNHR) while Russia and Assad combined killed more than 10.000 civilians in 2016 (76% of the total number). So despite all criticism, the US could defend some of its high ground despite widely ignoring the killings of the other parties.
But if the US air force under President Donald Trump sticks to its announcement to “accept higher risks” while targeting ISIS and al-Qaeda-linked militants, the country loses its high ground and becomes just another foreign power slaughtering Syrian civilians. This is exactly what Russia, Iran and the Assad regime want as it would justify their approach in the country. Therefore, the US must conduct a serious investigation in the latest attack in al-Jineh and determine if serious mistakes were made in its targeting procedures. Otherwise, the Trump administration will gamble away the last bit of trust the US enjoys among some Syrians and friends of the Syrian people, which would eventually strengthen extremists on all sides.
-------------------------------------------------
Julian Röpcke is a newspaper editor and political commentator, based in the German capital, Berlin. With a degree in Political Geography and Sociology, Mr. Röpcke started analyzing geopolitical conflicts after the US-led invasion of Iraq in 2003. He covered the “Arab Spring” as well as the evolving conflicts in Syria and Ukraine from their very beginning. Julian Röpcke works for BILD, the largest newspaper and leading online news portal in Germany (@JulianRoepcke).
قيم هذا المقال 7 0