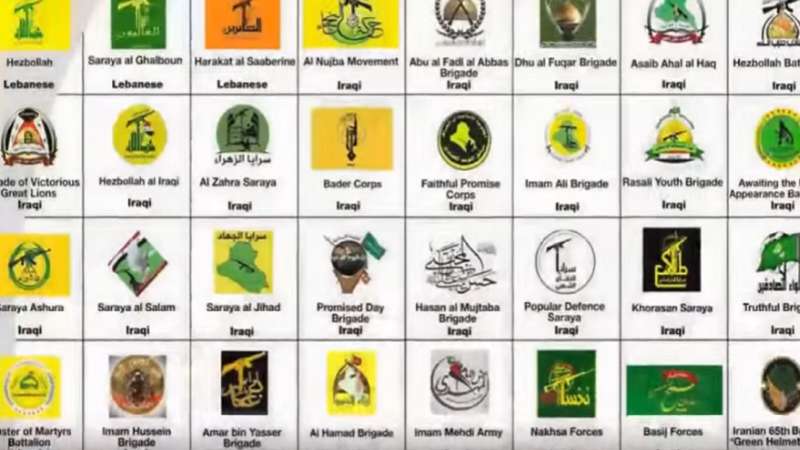 Names and banners of some militia groups fighting Syrian people (FSA YouTube)
__new_Underarticle_image_EN__
Hakim Khatib
While the danger posed by foreign fighters flooding into Syria has become a central point in world media and research, this focus was more likely to concentrate on Islamically-flavoured extremists and their globally Jihadist ideology. Much less attention was given to those who fight beside Assad regime, who indeed espouse an extremist ideology but with a different flavor. As much as Assad relies on Russian fighters, warplanes and destructive force, he also relies on Iran’s money and Shiite foreign fighters from a variety of countries.
Reports estimate the number of foreign fighters who have flocked into Iraq and Syria since 2011 to be between 27,000 and 31,000. Data provided by Soufan report on foreign fighters in Syria in 2015 marked significant increase in the number of foreign fighters travelling to Syria.
However, this report, like many other reports on Syria, solely focuses on those who fight under the name of ISIS or al-Qaeda affiliated groups neglecting those fighting on the behalf of Assad, who are just as foreign. The reason that researchers focus more on extremist Jahadists is that chances for funding such kind of buzzword-research is much higher.
In fact, thousands of foreign fighters coming from Lebanon, Iraq, Iran and Afghanistan have joined Assad regime since 2011 to form a large and growing repressive force of Shiite militias.
Iran, Assad’s fiercest backer, has announced in March 2017 that more than 2100 of its soldiers have died in operations on the front lines in Syria in recent years. Such an unusual confession brings Iran’s military and militia activities out of the shadows and marks the extent of Iran’s human sacrifice.
Iran has claimed from the very beginning that it has been defending the Shiite shrines in Syria while offering “military advice” to Assad army against ISIS militants and other rebel groups. This does not, however, correspond with Iran’s tactical deployment of its forces. They are nowhere close to ISIS stronghold. Iran’s militias are mainly deployed to territories in Aleppo, Latakia and Damascus and primarily engaged in combating Syrian rebel groups, including the Free Syrian Army.
__new_in_first_article1__
It is believed that by December 2013, Iran had approximately 10,000 operatives in Syria including thousands of Iranian paramilitary Basij fighters, Arabic speaking Shiite volunteers and Iraqi Shiite combatants. By 2014, Iran had already spent billions of dollars in support for Assad. Iran has covertly been recruiting Shiite Afghanis and Pakistanis, using lure and coercion to fight in Syria along Assad for no more than 500 USD a month. On the one hand, they were promised to be granted a permanent residence permit in Iran and a monthly salary. On the other hand, they were threatened of tightening the grip of procedures, which makes it difficult for them to stay in Iran with their families.
Only during the regime’s latest offensive on Aleppo in late 2016, some estimates suggest that about 5000 militia combatants, hailing from Iraq, Lebanon, Iran, Afghanistan and Pakistan, were fighting for Assad. The Iraqi al-Nujaba militia had sent around 4,000 of its fighters in preparation for the Aleppo battle, according to an al-Nujaba official.
Lebanese Shiite militia Hezbollah, Tehran’s most trusted and capable force on the ground, held a high-profile military parade in al-Qusair, which fell to the group in 2013. By 2014, it was estimated that Hezbollah has over 4000 fighters in Syria while rotating over 10,000 fighters, deployed in sensitive checkpoints and key battlefronts across the country.
According to a report published by the National Council of Resistance of Iran, non-Iranian mercenaries number is around 55,000 men. Iraqi militias are around 20,000 men, Afghan militias are approximately 15,000 to 20,000 men, Lebanese Hezbollah are around 7,000 to 10,000 men, and Pakistani, Palestinian and other militiamen number approximately 5,000 to 7,000. Of course these numbers exclude Russian foreign fighters meddling in Syria.
The numbers of Assad’s foreign fighters remain estimations and vary significantly due to an obvious lack of research.
-----------------------------------------------------
Hakim Khatib is a political scientist who works as a lecturer for politics and culture of the Middle East and journalism at Fulda University of Applied Sciences and the editor-in-chief of the Mashreq Politics & Culture Journal (MPC Journal).