Childhood in Syria – We have no idea! 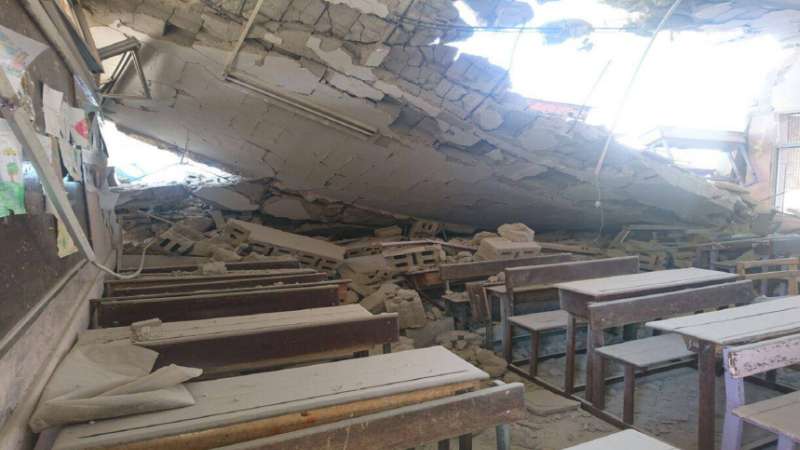 A destroyed UNRWA school in Khan ash-Shih, southwest of Damascus (Syria Live Map)
Julian Röpcke
At the end of the sixth year of the merciless war dictator Bashar Assad is waging against the Syrian people, there are still between 2 to 3 million people living in opposition-held areas across the country. It is no secret that around 50% of them are minors under the age of 18. It is also no secret that these children suffer the most under the circumstances the Assad war caused. Being a meticulous observer of this conflict since its very beginning, I admit to not knowing all the facets of the hardship these children suffer from.
Last week, I interviewed Syrian activists and relief workers of a German aid organization running six schools in Erbin, a city inhabited by 80,000 people in East Ghouta. I was shocked to know that thousands of children - 2000 of them in German-funded schools - are spending most of their days underground to escape the bombs Assad and his ally Vladimir Putin are dropping on the area almost every day. It is hard for a person outside Syria or outside another long-lasting war to imagine that children between 6 and 18 receive their entire education at underground schools while Assad is killing their relatives above the ground.
Activists from Erbin told me how hard it was to get school books and other educational tools into the area, only through tunnels to the benefit of the Assad regime’s men who control their entries, thus making huge sums of money by allowing in some goods into the besieged areas east of Damascus.
Activists also told me these schools are very popular as many parents seek to send their children to these German-run institutions. However, they are under no illusion that the ongoing assault by the regime on the area would finally result in total destruction, not just of these small projects but of the entire Damascus eastern countryside, mainly the cities of Erbin, Douma and Harasta.
“This will be another Aleppo,” they told me with tears in their eyes. Still, Western governments and regional players stopped even trying to convince Assad to cease his attacks on East Ghouta. While children in opposition-held areas are already facing a daily struggle, destiny for those affected looks even harder and could mirror the developments we saw when East Aleppo was finally captured by the regime and its Shiite militias forcibly displacing tens of thousands of people to other areas in Aleppo and Idlib province – where they are getting bombed from the air once again.
To me it was a glimpse of hope that independent relief organizations could achieve what the United Nations and foreign governments are not daring to do: To help people in besieged areas and try to give their children a future. The utter indifference when it comes to their fate marks a world-wide moral failure.
-------------------------------------------------
Julian Röpcke is a newspaper editor and political commentator, based in the German capital, Berlin. With a degree in Political Geography and Sociology, Mr. Röpcke started analyzing geopolitical conflicts after the US-led invasion of Iraq in 2003. He covered the “Arab Spring” as well as the evolving conflicts in Syria and Ukraine from their very beginning. Julian Röpcke works for BILD, the largest newspaper and leading online news portal in Germany (@JulianRoepcke).