Syria: A civil war or a revolution? 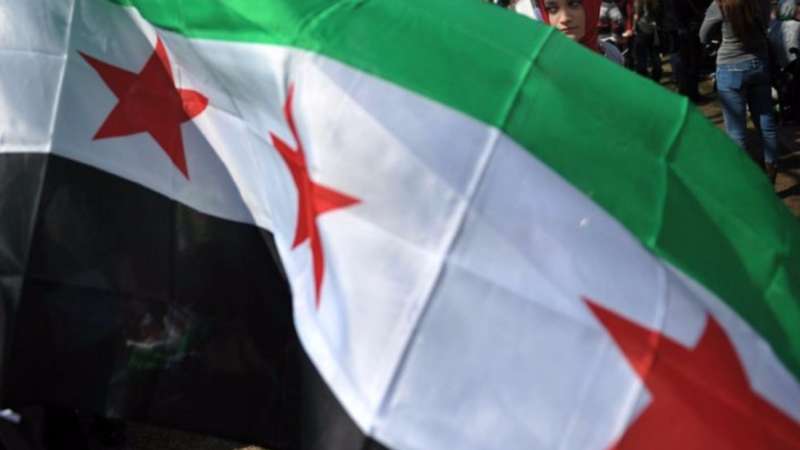 Syrian revolution flag (Photo: AFP)
Anisa Abeytia
The mainstream media and the international community’s continued obdurate description of the Syrian Revolution, now in its 6th year, as a civil war exposes a deep misunderstanding and misrepresentation of the realities on the ground in Syria.
Searching the two terms in Google yields the following results: “A civil war, is a war between citizens of the same country,” while a revolution is “a forcible overthrow of a government or social order in favor of a new system.”
The term revolution appears to have fallen out of fashion, replaced with less ideologically loaded terms like, "spring," or "conflict" and of course, civil war. The revolution is a thing of the past, events that occurred in the 17th to the 20th centuries. Countries like France, Russia, the United States and even Mexico had revolutions. Revolutions are virtuous causes that morally demand support. A “spring” is a deep cleaning of a house after a long winter. A “conflict” is an altercation or dispute. A “civil war” is domestic violence that no one wants to get involved in.
Civil wars are fought against legitimately elected leaders, while revolutions are waged against dictators and despots.
Ultimately the media and the international community send a clear message to the Syrian people: “Your cause is not just. Your leader is legitimate.” This explains the continual equivocation on the part of the international community and the continued cooperation and coordination with the Assad regime even on the delivery of humanitarian aid. He is viewed by the mainstream media as the legitimate president of Syria.
This delusional thinking is not new. In the 1980s, the revolutions that occurred in Central America hit the headlines, but the media and western governments called them civil wars.
Guatemala, Nicaragua and El Salvador fought wars to bring democracy to their countries after decades of western backed dictators. Central Americans rose up to overthrow puppet governments that enforced policy favorable to western corporations. Their struggle for self-determination was not only linguistically denied, but also detoured by foreign intervention much like what is occurring in Syria today.
An understanding of the wars that ranged through Central America throughout the 1980s until 1992 may prove instructive, if not cautionary, in understanding larger overarching themes on the world stage and the linguistics of power.
Ronald Reagan’s covert wars in Central America share several characteristics with the intervention of Iran and Russia in Syria. Both proxy wars served to maintain favorable policies towards the intervening countries and to expand their imperial reach. They accomplish this in part by providing an air of legitimacy to the dictator they back.
I was in Central America in the late 1980s and saw first-hand the devastation. Many people forgot Oliver North and the Iran-Contra Gate scandal that used Iran as a proxy to provide US weapons to the Contras in Nicaragua to dispose the democratically-elected Sandinistas. It involved the use of the CIA as drug traffickers to fund this illicit triangle. The region till now continues to suffer because of Reagan’s policies. The intervention of foreign powers and the brutality of para-military groups created a refugee crisis, as in Syria.
In 2014, train loads of Central American children fled their homes bound for the US at the same time Syrians began flooding into neighboring countries. These children were escaping the violence of drug lords who were created in the US during the Reagan wars in Central American. Los Angeles in the 1980s became home to a large Central American refugee population. These children refugees of Reagan’s wars witnessed horrendous atrocities and as adults formed gangs in Los Angeles known for their brutality. They were later deported back to Central America and now terrorize the region, creating another wave of refugees. The Reagan legacy is creating now another wave of violence that reverberates with the consequences of language and foreign interests.
------------------------------------------------
Anisa Abeytia is a freelance writer who contributes to a good number of media outlets. Abeytia is actively engaged in advocating for the Syrian cause since 2012 and more recently for refugee rights. She produced/directed three documentaries on Syrian refugees. Abeytia is a graduate of Stanford University with an MA in Post-Colonial and Feminists Theory.