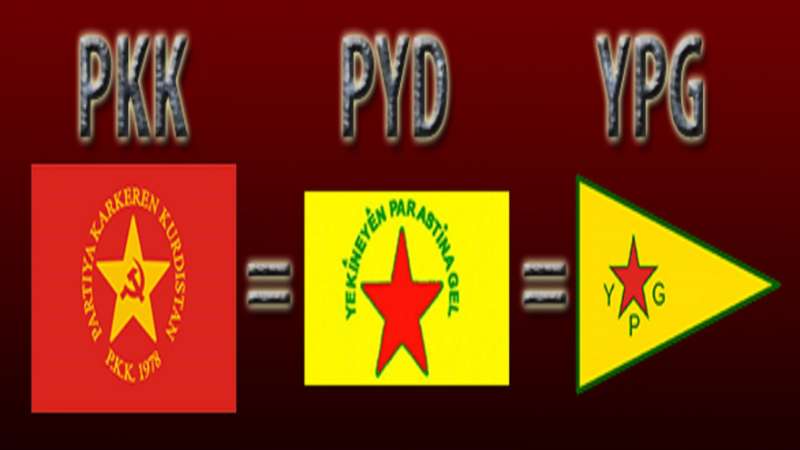 The PKK terrorist group’s Syrian affiliate Democratic Union Party (PYD) and its armed wing People’s Protection Units (YPG) have been terrorizing the people of Syria for quite a while. The U.S.-backed YPG forces have been committing ethnic cleansing and forced displacement in different parts of Syria that it has captured in the name of battling ISIS.
There is no doubt that the YPG is an extension of the PKK, which is listed as a terrorist group by the U.S., the EU, NATO and other international organizations. However, the YPG has enjoyed a great amount of freedom in Syria for years. The only reason why such a terrorist group received so much “fame” can be explained by their alleged ultimate goal: Fighting ISIS terrorists.
In fact, there is another side to their story. Looking back at the past, the YPG has captured large swathes of land from ISIS in Syria with the help of the U.S. Actually, one could contend that the YPG would not have been able to take on ISIS if the American help had not been there to rescue them.
The aforementioned ethnic cleansing and forced displacement in different parts of Syria took place in PYD-held areas. While the YPG took full control of ISIS-held areas, it turned Arab villages and towns into Kurdish zones. There are a good number of reports and witnesses exposing the YPG’s real ultimate goal.
Closely following the YPG’s actions in Syria, one must be quite sure of the terrorist group’s dreams in the land it occupied: Forming a de-facto Kurdish state in northern Syria. Even though major actors in Syria have been trying to ensure that the integrity of Syria will be protected, the continuous backing to a terrorist group that has been dreaming of an autonomous state within Syria is tolerated.
If Syria’s territorial integrity is to stay intact once the hostilities in the country are over, the PYD and its armed wing YPG must be stopped without any condition. For this reason, the mistakes from the Obama administration must be corrected as soon as possible during the Trump era.
Ankara has been piling up pressure on the Trump administration towards a joint plan to retake ISIS’s so-called capital Raqqa. The Turkish government, a strong NATO ally to the U.S., rightfully calls on Washington to abstain from arming and equipping a terrorist group.
__new_in_first_article1__
It is speculated that the U.S. will make a decision about which party to side with on the ground in Syria to retake Raqqa from ISIS in the next few days. The crucial decision will play a significant role in determining the future of Syria.
Provided that the U.S. decides to extend its backing to the YPG and goes full force towards Raqqa, the group’s dreams for a terrorist state in northern Syria will be bolstered.
The Free Syrian Army (FSA), which consists of different Syrian opposition factions, has been effective in the fight against ISIS since the launch of Turkey-backed Operation Euphrates Shield on Aug. 24. The FSA, in cooperation with the Turkish military, has captured many villages and towns, which had been considered as ISIS strongholds.
While there is an option on the table to side with the FSA and a vital NATO ally, the U.S. would commit a grave mistake by choosing the YPG, which has an ultimate goal of dividing Syria.
Six years into the bloody conflict in Syria, we all should have one common idea in our minds: Terrorist groups such as the YPG should not be tolerated and must be immediately wiped out of Syria. In addition, a political transition should be established for the era of the brutal dictator Bashar Assad to come to an end.
--------------------------------------------
Yunus Paksoy is the chief reporter of the Istanbul-based Turkish newspaper DAILY SABAH. Paksoy has covered Turkey’s Operation Euphrates Shield in Syria and the Mosul Operation in Iraq and focuses on developments in Syria, the Middle East and Turkey’s southeast.
قيم هذا المقال 5 0