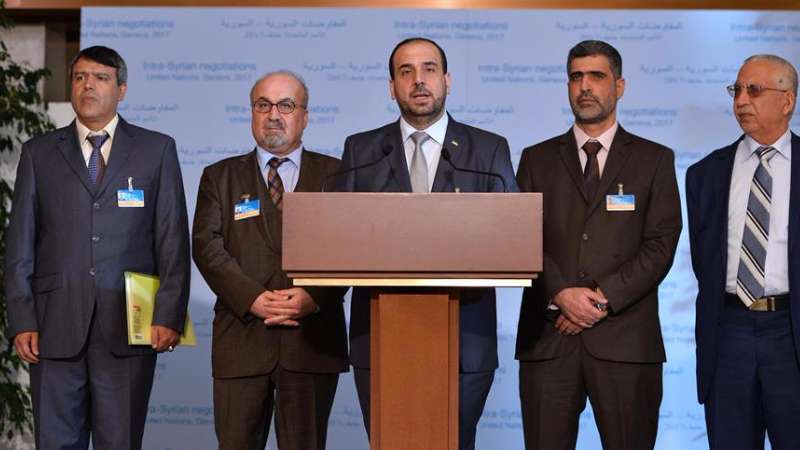 Syrian opposition's Nasr al-Hariri speaking (Photo: AA)
Orient Net
The Assad regime has been setting up a buffer zone between ISIS and the Turkey-backed Free Syrian Army (FSA), the head of the country’s opposition delegation at the Geneva IV talks said on Monday.
On the fifth day of the fourth round of the intra-Syrian talks, UN Syria envoy Staffan de Mistura met the Syrian opposition delegation headed by Nasr Hariri, a senior member of the largest anti-regime group, the Syrian National Coalition.
"The regime is actually coordinating with ISIS and has opened a corridor to prevent the Free Syrian Army from fighting ISIS," Hariri told a news conference at the UN at Geneva following a two-hour meeting with de Mistura, accordint to Anadola Agency).
"We just gave the special envoy a video of testimony of a former detainee who was detained by the FSA and was recently released. In the video, he explains and testifies how regime terrorists are coordinating with ISIS," Hariri said.
About a possible change in Russia’s political position at the Syria talks, Hariri said: "We see an openness of their position."
The opposition delegation is expected to meet Russian officials in Geneva.
Last month, Turkey, Russia and Iran brokered talks in the ‎Kazakhstan ‎capital Astana to reinforce the Syrian ceasefire ‎introduced in the New ‎Year, in addition to the UN-backed peace talks ‎in Geneva.‎