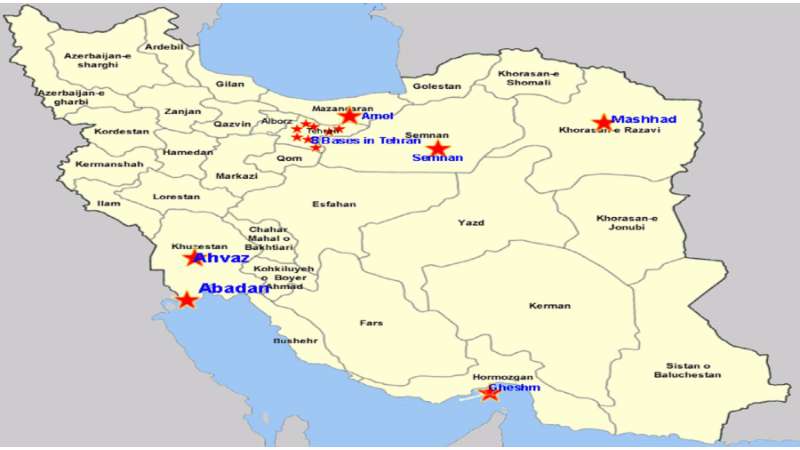 IRGC terrorists' training camps in Iran (Map: NCRI)
Orient Net - Arab News
The opposition National Council of Resistance of Iran (NCRI) Tuesday unveiled satellite imagery and extensively researched details on the operations, leadership structure, network and full scope of Iranian Revolutionary Guard Corps (IRGC) Quds Force terrorist training camps. Spread throughout 14 locations in Iran, these camps are designed to indoctrinate and train a diverse foreign cadre of fighters.
These camps provide a variety of tactical training for foreign terrorists, who then return to their home countries to operate under the aegis of Shiite extremist militant groups under the IRGC’s command. According to the report, these camps teach trainees a variety of terror techniques, procedures and radical Shiite Islamist ideology. The NCRI intelligence report is notable in that it includes specific details that until now had not been publicly available.
The NCRI maintains a network of informants inside Iran that enabled it once before to reveal details of Tehran’s covert nuclear program before the full extent of the nuclear reactor in Fordo was leaked to the international media by Western intelligence agencies. According to Awad Mustafa, a defense analyst based in the United Arab Emirates (UAE), “the revelations carried by this intelligence” released by the NCRI is “key” to understanding the Quds Force.
“Aside from the extensive technical warfare training, the ideological and theoretical classes given are key to ensuring that their trainees from Yemen, Syria, Iraq and Lebanon will be loyal,” said Mustafa. The Quds Force “has been proven to be operating… in Bahrain and this release confirms the evidence provided by Bahraini security forces over the past two years.”
The training camps are divided along the various countries from which the fighters originate, including Syria, Bahrain, Iraq, Afghanistan, Kuwait, Yemen and Lebanon. Smaller, select groups of Shiite militants are trained in third countries to conduct terror operations. The training includes establishing sleeper cells and compartmentalized terror cells.
While most international media coverage is focused on Daesh’s and Al-Qaeda’s capacity to launch external terror attacks and radicalize individuals in the West, the IRGC has been enhancing its training and radicalization program. Yet there remains a notable gap in international recognition of the full extent of its ambitions and foreign-fighter operations.
The spotlight that this special report places on Tehran’s training camps, and the naming of the senior IRGC generals in charge of international terrorist training programs, ought to catalyze fresh thinking on how the international community can best counter this threat to global security.
According to captured IRGC communications revealed by the report, the IRGC training directorate is known as Directorate 12,000. The headquarters is located at the sprawling Imam Ali military base just outside Tehran.
The commander of Directorate 12,000 is an IRGC veteran close to IRGC commander Qassem Soleimani. The basic training for the would-be terrorists is approximately 45 days, but more extensive and specialized training can take up to nine and sometimes 12 months.
The international nature of the terrorist training complex overseen by the IRGC includes fighters from the West. The report alleges that in recent years the IRGC has also trained agents from Latin American countries, including Venezuela, Uruguay, Paraguay and Bolivia. The fact that the IRGC is training operatives from Latin America could mean they could infiltrate the US from its southern border.
The IRGC’s Mashhad Center is one of its largest, and trains Afghans (and possibly Taliban fighters) to fight Afghan government forces and the US-led coalition. The IRGC department in charge of Afghan operations is known as the Ansar Corps. Here, the intersection between Iran and Sunni extremists is very clear.
Tehran’s training network for international terrorists is not limited to radicalized Shiite fighters. The recent Taliban terror attack against a delegation that included diplomats and humanitarian officers from the UAE in Afghanistan reveals how Iranian training and supply of a vast terror network is a common threat shared by the Arab Coalition and the West.
A special session by the US and its Arab allies is needed to draft a clear plan on how to neutralize the IRGC’s terror-training network. This does not necessarily entail a conventional war. An unconventional response is needed to adequately deal with this unconventional problem. The geographic space in which Al-Qaeda and Daesh can train international terrorists may be rapidly shrinking, but it seems the IRGC’s terror-training arm has redoubled its efforts.
In a public statement, the NCRI urged the international community to officially designate the IRGC a terror entity. This is a prudent first step. If Western and Arab intelligence agencies are able to corroborate the report’s veracity, there can be no more dealing with IRGC terror exportation half-heartedly. Given what this report reveals, putting the IRGC “on notice” must now entail concrete strategic solutions that shut its global threat network once and for all.
Oubai Shahbandar (Arab News)