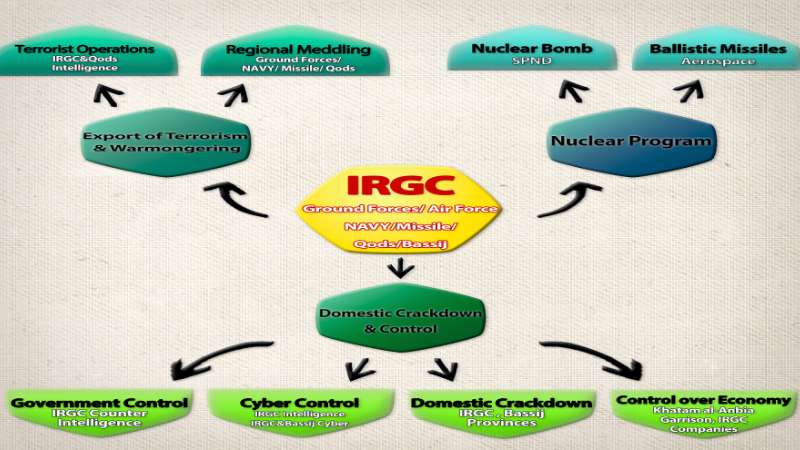 IRGC chart (NCRI)
Orient Net - NCRI
The following information has been gathered and documented by the social network of the People’s Mojahedin Organization of Iran (PMOI/MEK) inside Iran. The revelations are made public by the National Council of Resistance of Iran - US Representative Office.
According to detailed reports from inside the clerical regime, the Islamic Revolutionary Guard Corps (IRGC) has created a large directorate in its extraterritorial arm, the Quds Force, in order to expand its training of foreign mercenaries as part of the regime’s strategy to step up its meddling abroad, including in Syria, Iraq, Yemen, Bahrain, Afghanistan and elsewhere. The overhaul has occurred with the blessing of Supreme Leader Ali Khamenei, who according to a senior adviser to the IRGC commander-in-chief and the directorate’s former commander, IRGC Brigadier General Khosrow Orouj, personally applauded its creation during a recent visit to the Quds Force.
The intelligence reports, gathered over several months by various sources of the PMOI’s network from inside different units of the IRGC, especially the Quds Force, indicate that this directorate has dozens of training camps across Iran. The camps have been divided based on the nationality of the trainees and the type of training. Both terrorist training and also military training for militias are provided, enabling them to better infiltrate and advance the regime’s regional objectives.
Every month, hundreds of forces from Iraq, Syria, Yemen, Afghanistan and Lebanon -- countries where the regime is involved in frontline combat -- receive military training and are subsequently dispatched to wage terrorism and war. Smaller groups are also trained in other countries in order to conduct terrorist acts and operations. Since 2012, the extent of training of foreign mercenaries in IRGC-controlled camps of the Quds Force has increased.
For operations in countries where there is no open warfare - including Persian Gulf countries such as Bahrain and Kuwait - terrorists cells are trained instead.
General Information:
The Quds Force Training Directorate (group) forms an important part of the terrorist Quds Force. In internal IRGC communications, the codename of the Quds Force Training Directorate is 12,000. The headquarters is located at the Imam Ali military base, at kilometer 20 of the Tehran-Karaj highway, Ardestani Boulevard, close to the end of Saravan Street. The site is comprised of a large complex housing several IRGC garrisons; the Imam Ali Garrison is situated in the southeastern quadrant. The area of the Imam Ali Garrison alone is about 10 hectares (350m x 330m), about 25 acres. The logistics section of the Imam Ali Garrison is located in another part of this complex, the so-called Mostafa Khomeini Garrison, and has a separate entrance and exit.
The Iranian resistance has so far identified 14 training centers belonging to the directorate.
Organization and Command:
The commander of the Quds training directorate is a veteran Quds commander who reports directly to Quds Force Commander, Qassem Soleimani. The group’s commander until 2015 - and for several years - was Brigadier General Rahimi. Before Rahimi, IRGC Brigadier General Khosrow Orouj held the position. Previously, Orouj was the IRGC commander in Lebanon, where he had a close relationship with the Lebanese Hezbollah. He participated in the 33-day war in Lebanon and was a friend of Imad Mughniyeh, a senior member of Islamic Jihad and Hezbollah. 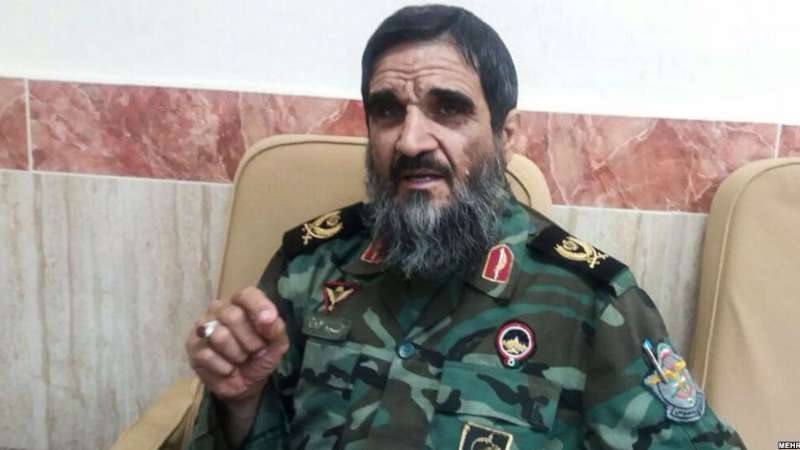 IRGC Brigadier General Khosrow Orouj
In an interview in November 2016, Orouj said: “I was in charge of training for the Quds Force, and later took charge of training of the Quds Special Forces, working with them round-the-clock, going back and forth to Lebanon. … When Khamenei visited the Quds Force, the only unit that he applauded was that same training unit.” His remarks underscore Khamenei’s close relationship with this terrorist training initiatives, as well as Khamenei’s reliance on the IRGC to advance the regime’s agenda and objectives.

Brigadier General Seyyed Shafi Shafiee had been Deputy Commander of the training directorate starting from 2014. Prior to that, he was stationed in Syria. He was transferred back to Syria in 2016. He was killed in combat in the Khan Tuman area around Aleppo in May 2016.
One of the senior Quds Force commanders runs the training directorate, meaning that he is exclusively assigned to managing its affairs.
The Inspection commander is Massih Mohammadi. The Intelligence Protection commander is IRGC Colonel Bakhtiari. 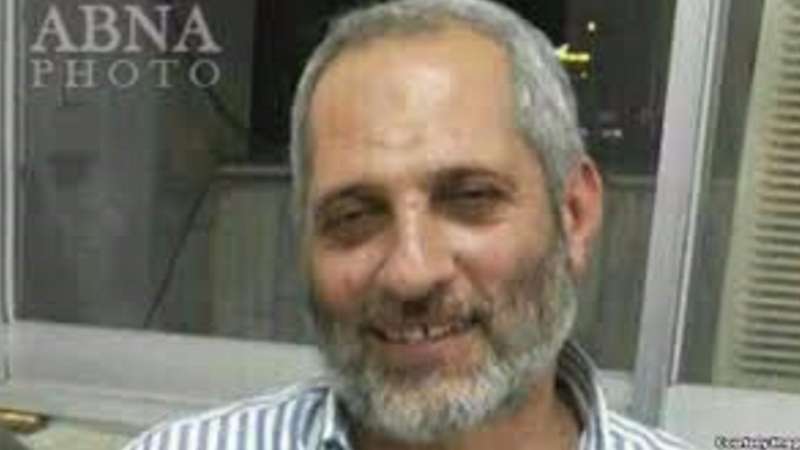 Brigadier General Seyyed Shafi Shafiee killed near Aleppo in May 2016
Training Process
Imam Ali Garrison:
In addition to housing the headquarters of the training directorate, the Imam Ali Garrison is one of its main training centers. There are two types of training: Basic and primary training, which is short-term, usually only about 45 days, because the objective of this regimen, especially for Syrian mercenaries, is to use them in military actions similar to those of the IRGC Bassij force.
There is also full military training with specialized courses for those who are hired by the Quds Force on a permanent basis. Terrorist training courses are given as well. These take about 9 and sometimes up to 12 months to complete.
- Terrorist training
In addition to the forces who are trained for military action as part of the regime’s overall meddling in the region, terrorist units of the Quds Force are also trained in separate and secret units and are dispatched to various countries in the Persian Gulf area, Asia, Africa, and Latin America. Individuals who are trained for terrorist operations are kept separately and in isolation. They have a separate suite inside Imam Ali Garrison that has a capacity to hold between 10 to 100 people. In most cases, terrorist training is given to teams of two people who are not in contact with other units of two.
In recent years, the IRGC has brought back a number of its agents from Latin America, including Venezuela, Uruguay, Paraguay and Bolivia, to the Imam Ali Garrison for training, leaving them in the hands of the Quds Force. These people were held in isolation and their presence and identities were kept top secret. The commander in charge of training for these forces is Colonel Tahmasebi.
Training at Imam Ali Garrison: All those forces who are supposed to be trained, initially undergo a body building boot camp for one week. The body building group is a training section whose commander is an IRGC commander named Mowlaee. Subsequently, specialized training is given in other training centers of the Quds Force. Upon completion of this period, all forces return once again to the Imam Ali Garrison, where a final exam and confirmation process is administered. In effect, the final recruiting is performed at this garrison.
-  Different sections of the training directorate in Imam Ali Garrison

1. Specialized training for heavy weaponry:  The commander of this section, which is identified by codename 320, is Colonel Ali Mohammad. It has 3 sub-sections: drones, rockets, heavy weapons and heavy weapons maintenance.
2. Missile launch training: This course has two sections, theoretical and practical. The theoretical training portion is carried out with the help of simulators. After completion of the primary course, forces go to Semnan base to receive practical training for firing missiles.
3. Marine training
4. Paratrooper training
5. VIP Security training (also known as “Protocol”). The commander of this section is Colonel Ramky, who is from Amol in northern Iran.
- Composition of Trainee Units
In recent years, the largest contingent trained in Imam Ali Garrison came from Syria, and at some points may involve up to 230 trainees per session. In addition, the Quds Iraqi forces (Shia militias) go to this garrison to receive missile training. Mercenaries from other countries, such as Yemen, Lebanon and Bahrain, also receive training at this base.
Subsequent to the increased meddling of the Iranian regime in Syria, the number of training courses in Imam Ali Garrison has increased. Some of the mullahs from Qom’s Al-Mustafa Community were also trained in the garrison and subsequently sent to Syria. A large number of people from Bahrain also took training courses here.
In addition to Imam Ali Garrison, the Iranian resistance has identified the following training centers belonging to the IRGC:
Imam Ali Academy in Tajrish, Tehran – Theoretical Training
IRGC mercenaries are first sent to this center to learn theoretical courses promoting fundamentalism and terrorism, and subsequently sent to other centers for practical training. This site was previously the headquarters of the Quds Force training directorate and used for practical terrorist training. However, after it was exposed, it was divided into two parts, with one being transferred to the Imam Ali Garrison (mentioned above) and the other to Baadindeh Center in Varamin (mentioned below). The address for Imam Ali Academy is: Alborz Street in Tajrish, Saad Abad district in Northern Tehran, North of Saad Abad Palace.
Baadindeh Center in Varamin – Urban Training
Urban warfare and guerilla training, including riding motorcycles for terrorist operations, is provided at this center. Driving courses and various vehicle maneuvering courses are also provided. One of these exercises is related to freeing hostages, and is carried out inside buildings designated for learning and training. The commander of this center is an IRGC commander named Ebrahimi. The center is located 30 km south of Varamin in the Siah Kouh region. This center is considered to be in a protected IRGC area in the vicinity of a number of secret IRGC sites. A portion of the Quds training directorate was transferred to this area after relocation from the former location of the Imam Ali Garrison (in northern Tajrish). The site is codenamed 950. This section of the directorate primarily focuses on the provision of terrorist and urban guerrilla warfare training. 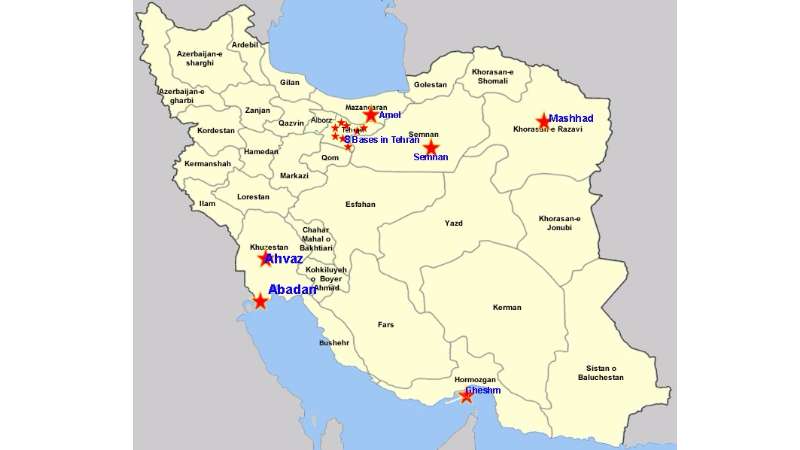 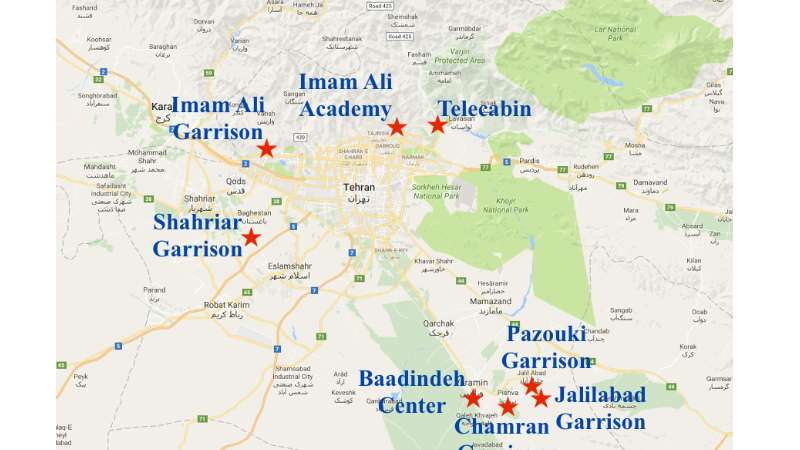 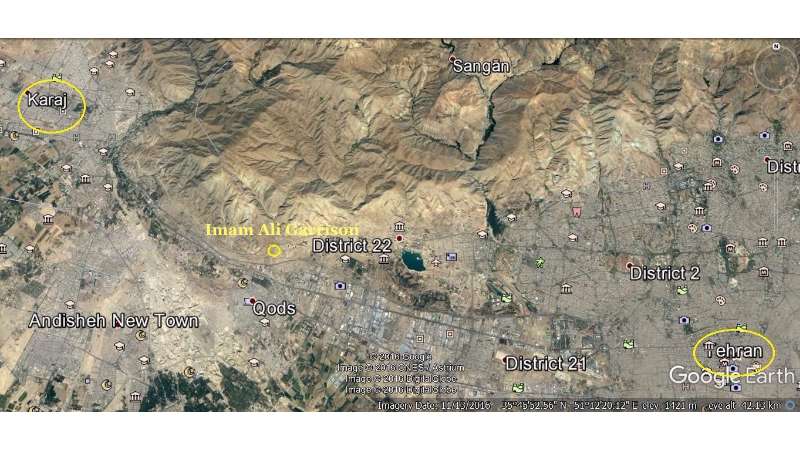 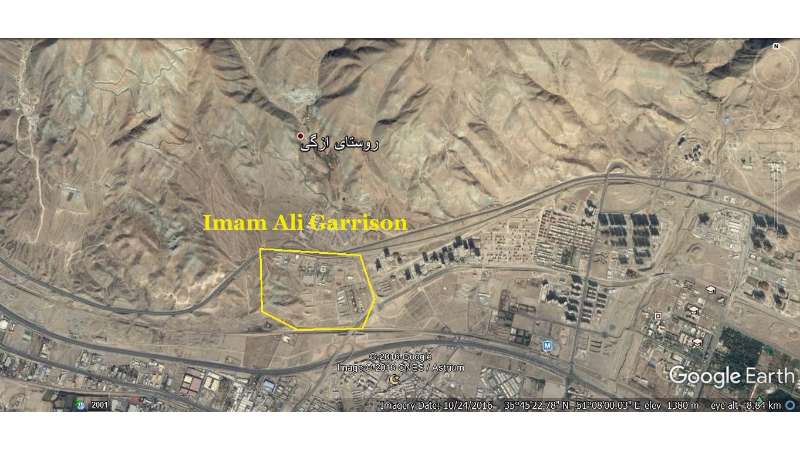 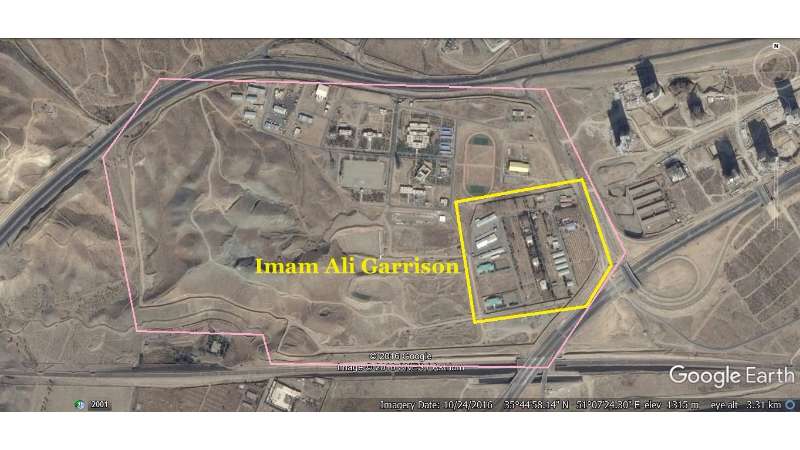 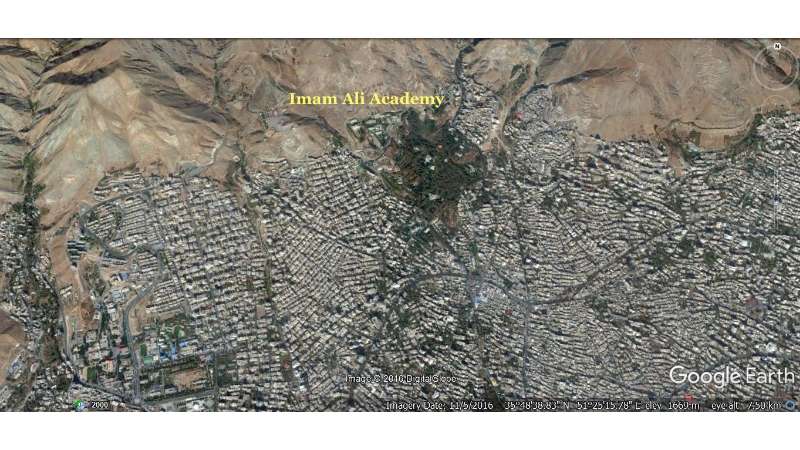 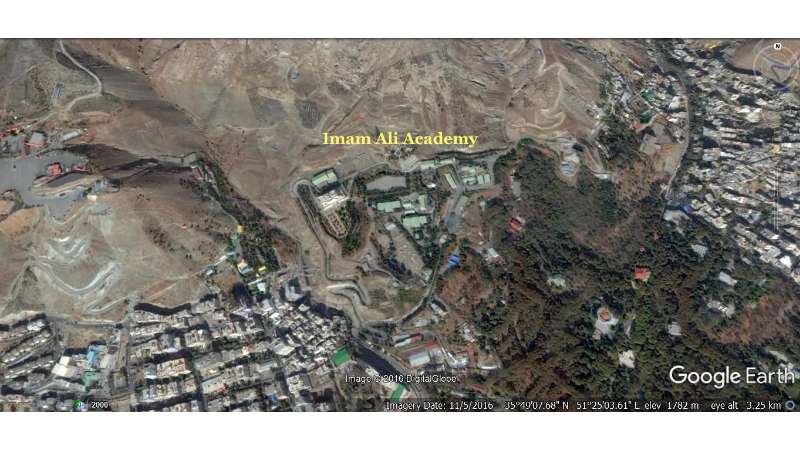 IRGC’s Theoretical Training Camp for Foreign Nationals
Located north of Saad Abad Palace, Alborz Street in Tajrish, Northern Tehran, IRGC mercenaries are first sent to this center for theoretical courses on fundamentalism and terrorism, and then sent to other centers for practical training. This site was previously used for practical terrorist training, but after it was exposed, practical military and terrorist training regimens were moved to the Imam Ali Garrison.
Lowshan Garrison
IRGC’s Special Training Camp for Foreign Nationals
IRGC has a garrison near the city of Manjil, near the town of Lowshan; a portion of this garrison is provided to Qods Force for such training purposes. 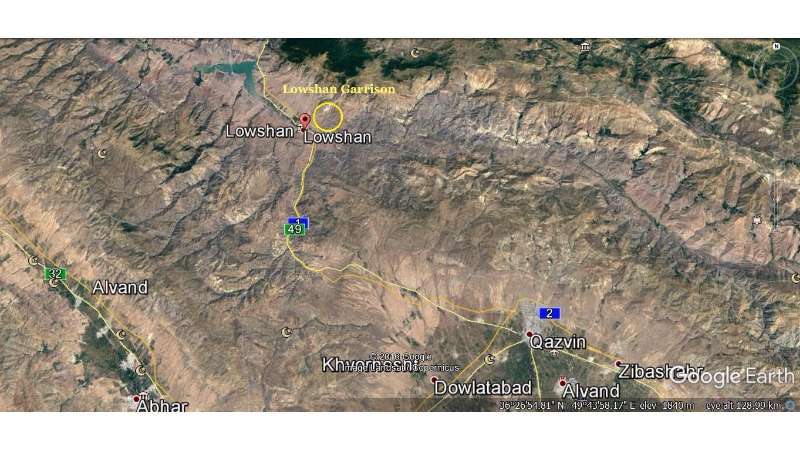 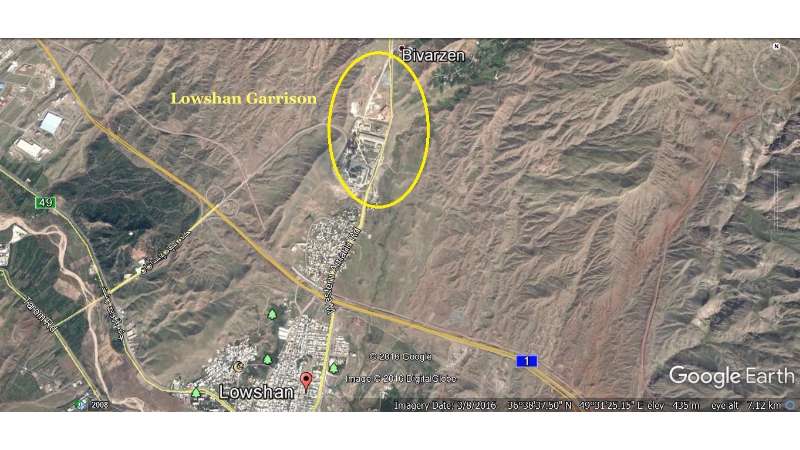 Pazouki Garrison
IRGC’s Training Camp for Afghan Nationals
At this garrison, in each session, 200 Afghans are trained for deployment to Syria and assigned to the Fatemiyoun Division. Infantry training includes: Kalashnikovs, machine guns, mortars, tactics, sniper, and others. All instructors are from the Iranian Revolutionary Guards and the Quds Force. 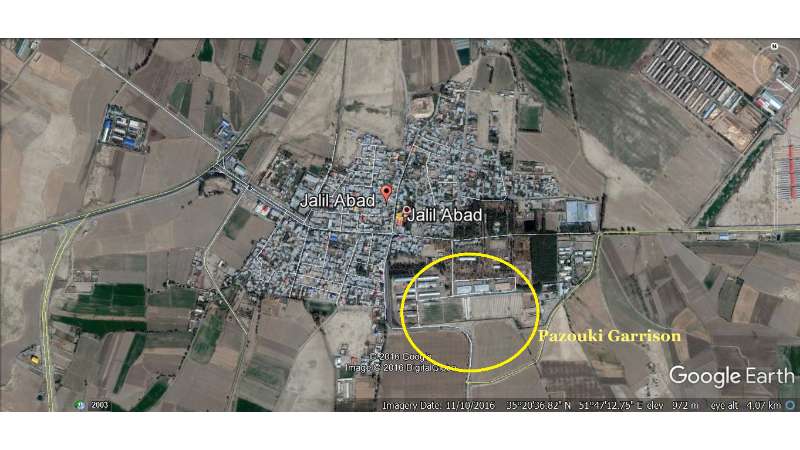 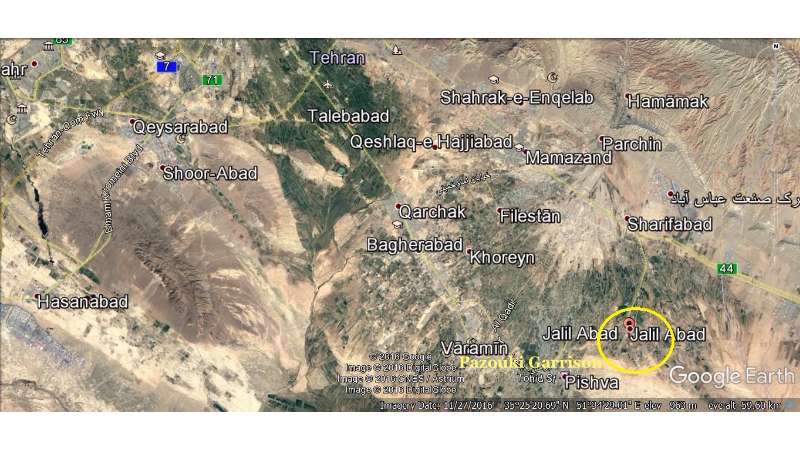 Badindeh Garrison
IRGC’s Urban Warfare and terrorist Training Camp for Foreign Nationals
Urban warfare and terrorist training, including use of motorcycles for terrorist operations, is given. Driving courses and various vehicle-maneuvering courses are also given in this center. One of these exercises is related to freeing hostages, and is carried out inside buildings designated for learning and training. The commander of this center is Ebrahimi. 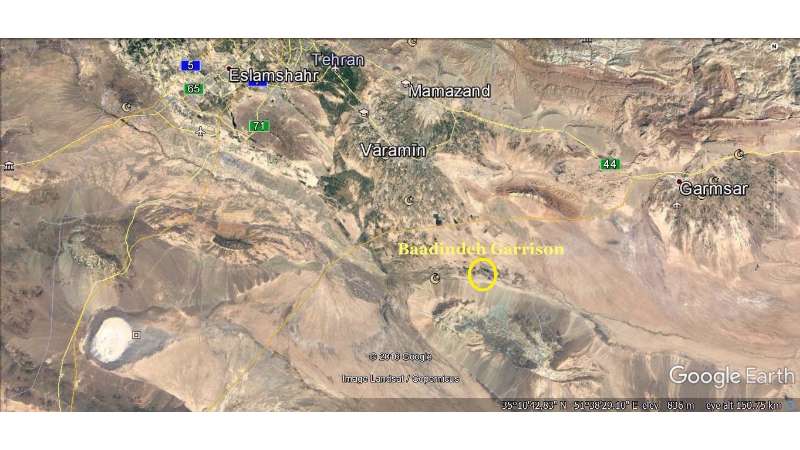 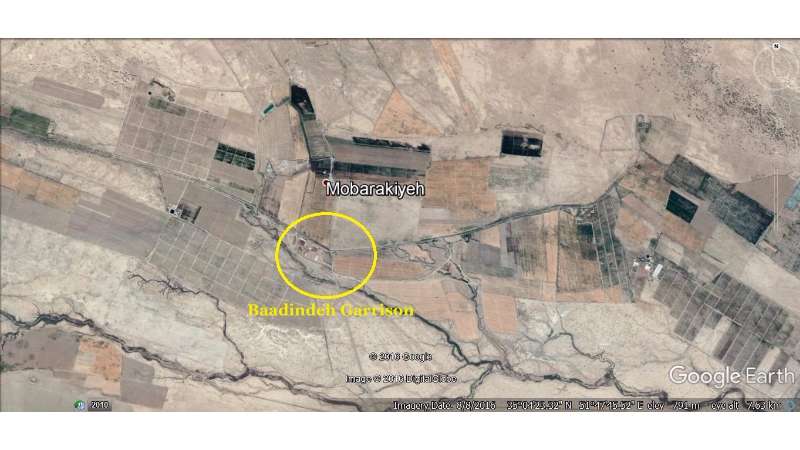 These materials are being distributed by the National Council of Resistance of Iran-U.S. Representative Office. Additional information is on file with the Department of Justice, Washington, D.C.