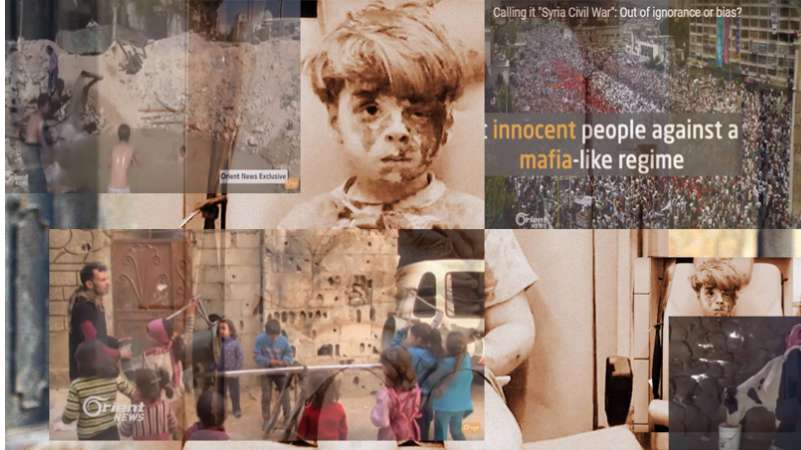 Sam Karali
One report talked about an old Syrian man who refused to leave his home. As Assad-Russian bombardment escalated in Daraa countryside, 100.000 civilians were forced to leave their homes to protect themselves from the Assad death machine. The man (Abu Mustafa) preferred to stay and take care of his animals.
One day after filming with Abu Mustafa, Russian bombardment responded to his decision to stay at his home to take care of his animals by killing him.
Russian jets oblige 150.000 civilians to flee homes in Daraa countryside
Publication date: Feb. 15, 2016.
A video report about a creative man from Damascus countryside. The man used to change the tools used by Assad to kill Syrians into joyful instruments for children.
The Joy Maker
The video was published on May 17, 2016.
On June 17, Assad-Russian jets conducted air raids targeting residential areas in Aleppo. In the neighborhood of al-Katirji, 6 civilians were killed, 10 others were seriously injured, and mass destruction caused by indiscriminate airstrikes. One photo showed a lovely boy sitting on a chair inside an ambulance with blood covering his face. The child out of shock was rendered speechless. No wonder the photo later became an icon for the tragedy of Syrian people in general and children in particular. The child’s name is Omran. Almost all people across the world came to know him except dictator Bashar Assad. Orient Net English was one of the first news outlets to publish Omran’s photo on June 17, 2016. Russian warplanes kill 6 civilians in Aleppo’s al-Katerji
Another report talked about a new kind of bombs used by Russian jets to target Syrians in Aleppo. These bombs caused massive annihilation in the infrastructure of the devastated city. Yet, Syrian children found a place to swim and play as the bombs caused damage to water pipes so big holes turned into “swimming pools”. Orient received a good feedback form Daily mail about the report: Russians use bunker buster bombs in Aleppo
The report was published on Sept. 25, 2016.
While what is going on in Syria has been labeled by international media outlets as a civil war, Orient Net English published an infographic counter-arguing this myth, stressing that the Syrian people have made a revolution for liberty and dignity after decades of Assad family dictatorship and its mafia-like regime.
Calling it "Syria Civil War": Out of ignorance or bias?
The infographic was published on Nov. 21, 2016