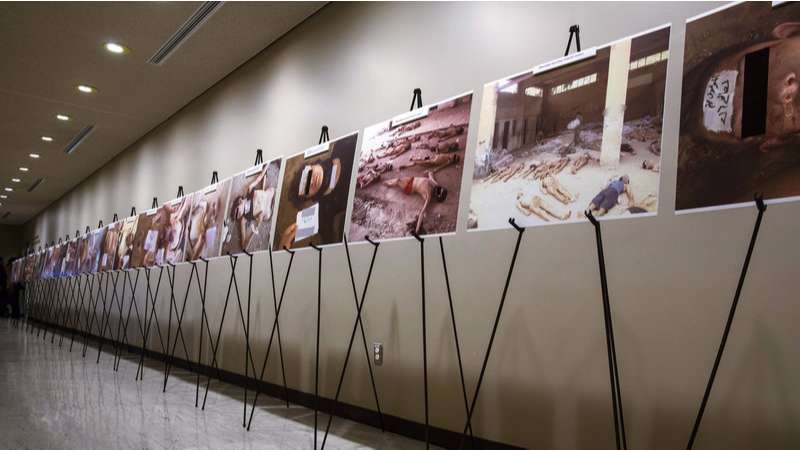 Images of corpses in Assad regime’s prisons displayed at the UN, 2015. Lucas Jackson/Reuters/Landov
More than 12,000 people have killed in detention by Assad regime between March 2011 and June 2016, according to Human Rights Watch’s (HRW) World Report 2017.
The report said that arbitrary detention, ill-treatment, torture, and forced disappearances by Assad regime continued to be widespread and systematic, and take place within a climate of impunity.
Deaths in Assad regime’s detention from widespread torture, abuse, starvation, beatings, and disease were also extensive with at least 12,679 persons dying in custody between March 2011 and June 2016, according to the report.
Moreover, the report documented Assad regime’s use of 13 types of internationally banned cluster munitions in over 400 attacks on opposition-held areas, killing and injuring civilians, including children. It added that Russian and Assad regime attacks used internationally banned cluster munitions extensively since 30 September 2015.
HRW’s World Report 2017 summarizes key human rights issues worldwide based on investigative work undertook by HRW staff in 2016.
قيم هذا المقال